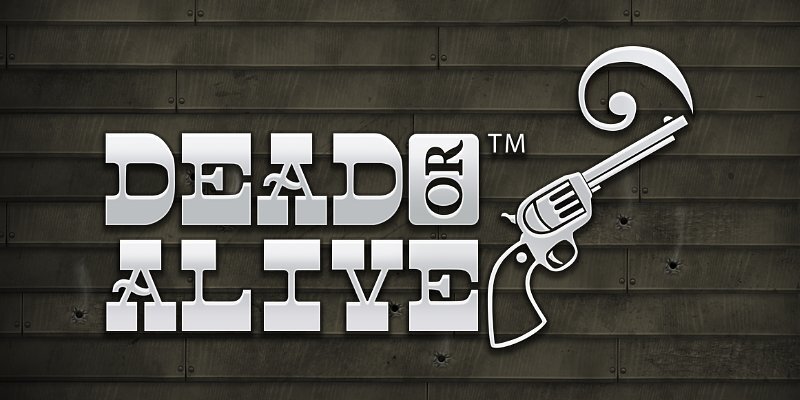 Dead or Alive is a classic casino slot from NetEnt, released in 2009 and still highly popular. The player gets to spin shot glasses, revolvers, and sheriff stars in this Western adventure. The wild symbol is an unknown bandit who turns into one out of five sticky bandits in the free spins, hanging on to their reels for the rest of the feature. This highly volatile slot has achieved some sort of cult status over the years. It’s really straightforward with just a few but sweet features, and a max win of 12000X that knocked players out of their chairs when it was released. Let's go back in time to find out what’s really going on in the Wild West.

This deadly game of outlaws has some valuable features everyone should try to use. The features in Dead or Alive are Wild Symbol, Sticky Wild Symbol, Scatter Symbol, and Free Spins.

Dead or Alive is a really good-looking slot, although the graphics aren’t anything extra, at least not so many years after its release. The reels are placed in the middle with the gun smoking logo on top. To the left is a gas light dangling in the wind, and to the right stands a windmill tower looking just like you picture the Wild West. On the side of the reels hang nine signs with the numbers 1-9, representing the game’s paylines. All buttons to play the game are at the bottom of the screen. You make a win by landing at least 3 of the same symbol on any of the 9 paylines going left to right. All wins must start at the first reel, with the exception of the Scatter Symbol which makes a winning combination as long as at least 2 symbols land anywhere on the grid. Since the bet is put on each of the 9 paylines, you can’t place a bet of 1, the closest is 0.9. The game is available on mobile phones, notepads, and desktop computers.

The lower-paying symbols in this cowboy village are 10, J, Q, K, and A. They pay between 0.2X-1.1X the bet for landing 3 and 2.8X-11.1X the bet for a combination of 5. The medium-paying symbols are two shot glasses and a pair of cowboy boots. They pay 1.1X-1.3X the bet for a combination of 3 and 22.2X-33.3X for a full winning line with 5 symbols. The most valuable symbols are a cowboy hat, a revolver holster containing a revolver, and a sheriff star. They pay 1.67X-2.2X for 3 and 44.4X to 111.1X the bet for a winning line of 5 symbols. The Wild Symbol is a Wanted Dead or Alive poster of an unspecified outlaw. It substitutes all mentioned symbols, and also pays on its own, giving 166.7X the bet for a combination of 5. In the free spins, the wild symbol becomes sticky, and it has one of five different bandits on the cover. The Scatter Symbol is two revolvers crossing each other. You’ll need to land at least 3 Scatter Symbols anywhere on the reels to activate the free spins, and the symbols also pay on their own, up to 277.8X for landing 5.

What is the max win in the slot Dead or Alive?

What features are available in the slot Dead or Alive?

The Wild Symbol is a poster saying “Wanted - Dead or Alive”, and has an anonymous picture of a cowboy taken from behind. The wild symbol substitute all paying symbols and also pays on its own according to the following:

In the free spins, the Wild Symbols turn sticky and contain one of the five outlaws Billy, Belle, Della, Apache, or Jesse. The sticky wilds stay in its position for the whole free spins feature, substituting the same symbols as the regular wild. If one or more sticky wilds land on all reels, the player will get an extra 5 free spins. The free spins can only be re-triggered once.

The symbol with the two revolvers is what you need to activate the free spins. You need to land at least 3 symbols anywhere on the grids, and you’ll be awarded 12 free spins. The scatter also pay out:

The scatter symbols can’t retrigger free spins within the feature.

The free spins feature is quite a lot better than the base game. As you already know, every wild symbol that lands becomes sticky and stays in its position for the rest of the feature. On top of that is a free spins multiplier that multiplies all wins by 2. You can retrigger 5 spins by landing wilds on all reels. The feature is over when you’re out of spins.

NetEnt has a few games that really hit big around 2010, and are still among the most popular ones at the online casinos. Some titles that are contemporary with Dead or Alive are Jack Hammer and Starburst. It isn’t hard to see why Dead or Alive has become such a big hit in the slot community. The 5x3-grid has a classic, easy-to-understand look. At the same time, the game feels modern, almost timeless, and it’s hard to believe it has aged as good. The free spins are really the only feature to hope for, and with them comes the sticky wilds to live it up even more. Although the features are few, the game manages to capture the player and keep the excitement high.

Since there aren’t a bunch of small features giving mediocre wins, the free spins can pay really well to the lucky player. You can actually score the max win of 12000X the bet, which was a lot even for a highly volatile game when Dead or Alive was released, and still is considered more than okay. If you play the most common version with an RTP of 96.82%, you’re also a lucky player since it’s quite a bit above the average slot. Just make sure your online casino isn’t using some of the lower RTPs. If you come across the version with an RTP of 98.08%, just enjoy, because that is a great return to the player. The betting can be a little irritating for people who like to bet 1, 5, or 10 in whatever currency they’re playing, since all bets need to be divisible by the 9 paylines. That’s also why the Max.bet is 18.

Dead or Alive from NetEnt is a classic casino slot in the Wild West where wild outlaws stick to the reels and create wins up to 12000X the bet.