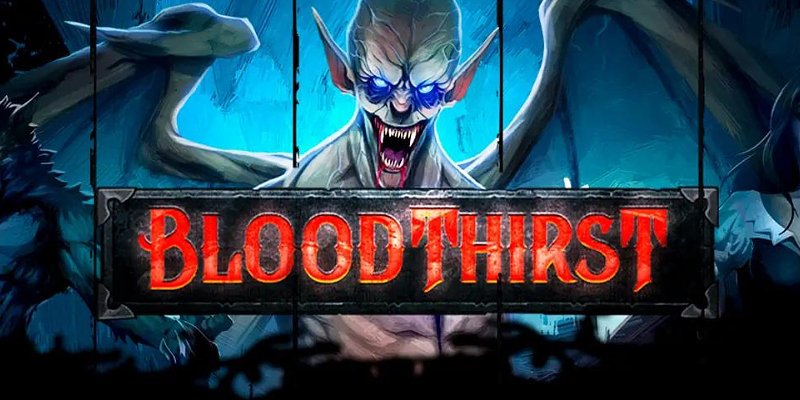 Bloodthirst is a new casino slot from Hacksaw Gaming with scary monsters. This dark mystic game occurs close to midnight when evil is just around the corner. The higher-paying monster symbols can expand into monster reels, giving an extra cash prize while covering all 4 positions on a reel. Landing monster reels of the blue-eyed demon with vampire’s teeth on all reels awards 2500X the bet, and the bloody free spins features can increase your balance by 10000X the bet.

We’re outside on a dark, cold night with a giant moon behind a mountain in the upper right corner. On the mountain are a castle and some other houses, and to the left of the reels are pine trees and naked mountains. Hacksaw Gaming has made a spooky soundtrack that helps create a scary feeling, and the dark reels are another contribution to the gaming experience. You make wins by landing 3 or more symbols of the same type on a payline going left to right. All wins must start on the first reel, and you can play the game on mobile phones, notepads, and desktop computers.

The lower-paying symbols are the royals from a playing card deck, 10, J, Q, K, and A. They all award the same, giving you 1X the bet for a win containing 5 symbols. The higher-paying symbols are 4 monsters. The green symbol with a naked man with no eyes in his sockets is a ghoul monster, a demon-like beast or monstrous humanoid from pre-Islamic religion. The yellow symbol is a female vampire, and the red is a werewolf. The last of them is the blue demon monster with big vampire teeth. These guys pay between 6X and 10X the bet for a 5-of-a-kind win. The Wild Symbol substitutes all mentioned symbols but not the Scatter Symbol or the Upgrade Symbol, which only appears in the free spins.

What is the max win in the slot Bloodthirst?

What features are available in the slot Bloodthirst?

The Wild Symbol is a W on top of a red star. It substitutes all regular paying symbols and pays 20X the bet for a 5-of-a-kind win.

The four high-paying monster symbols can land stacked, covering all positions on a reel. Whenever that happens, the symbols transform into one symbol, called monster reel, when a spin is over, and all regular wins are paid. The Monster Reels pay a special prize of 5X, 10X, 15X, and 20X the bet for the ghoul, vampire, werewolf, and demon monster.

The Immortal Free Spins are triggered by landing 4 Scatter Symbols. The player is awarded 10 spins, and one of the monster symbols is selected as the main symbol. The selected symbol is the only one that can expand into Monster Reels during the feature. When a Monster Reel of the main symbol lands, an indicator above the reel is activated for the rest of the Free Spins.

The free spins are for sale in different ways. You can pay 3X the bet for a Bonus Hunt Feature Spin that is 5 times more likely to trigger the free spins than a normal spin. Paying 100X the bet takes you straight to the Bloodthirst Free Spins with an RTP of 96.34%. If you double that and pay 200X the bet, you’re up for the Immortal Free Spins to an RTP of 96.35%.

Bloodthirst is definitely not for the faint-hearted player. This game doesn’t have the cartoonish style like some monster titles but goes all in with blood and gore like NetEnt’s classic vampire game Blood Suckers and Play’n GO’s Wild Blood II. The dark graphics contribute to the spooky feeling, and the reels are so hard-shaded that they’re almost hard to see.

Whenever any of the four monsters land stacked on a reel, they’re transformed into Monster Reels, paying up to 20X the bet per reel. Landing 5 Monster Reels of the same symbol triggers the Monster Takeover feature, paying up to 2500X the bet. This feature can trigger in both the base game and the free spins, where the chances of activation are higher. The Immortal Free Spins also collect each Monster Reel appearing, giving you a final spin revealing a special monster on all reels it has appeared on during the free spins.

Bloodthirst from Hacksaw Gaming is an entertaining monster game that awards wins up to 2500X the bet on spins in the base game.