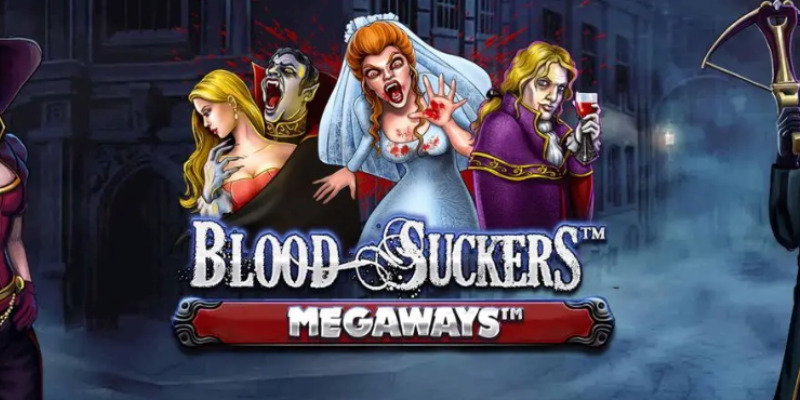 Blood Suckers Megaways is a new casino slot from Red Tiger, following up NetEnt's classics Blood Suckers and Blood Suckers 2. You will, just like in the first version of this game from 2013, open coffins and stick wooden nails in vampire's hearts. Slaying vampires awards Random Wilds, Super Wilds, Bonus Scatters, or a Win Multiplier. It can also lead to extra free spins, so it's important to choose the best coffins to score the highest wins. As its name reveals, the game comes with the Megaways mechanic that changes between 2 and 7 rows on each reel on every spin. Making the perfect combination in this bloody world can bring a max win of over 20,000X the bet.

Blood Suckers Megaways is a video slot from Red Tiger with 6 reels and changing rows between 2 and 7 on each spin. The changing number of symbols on display gives the player between 64 and 117,649 ways to win. The Min.bet is 0.1, and the Max.bet is capped at a relatively low 4. Blood Suckers Megaways offers an incredible RTP of 97.66% by default, but gaming operators can also choose to use one of the lower with an RTP of either 94.58%, 92.77% or 90.77%. The volatility is high, where you can get a max win of up to 20,521X the bet.

When you're slaying vampires and staying away from being bitten, you will get to know the features Cascading Wins, Wild Symbols, Scatter Symbol, Random Modifiers, Free Spins, and Bonus Buy.

The original Blood Suckers game takes place in a vampire castle where the player is a vampire hunter who is rewarded for killing vampires by sticking wooden nails through their hearts. The sequel is less bloody, with the young vampiress Amilia who goes to the vampire castle to find her ancestors' hidden treasures. In Blood Suckers Megaways, the player is once again rewarded for killing the blood-thirsty creatures.

We're outside a building that might be the vampire castle. A thick fog covers the surroundings, and a few people in high hats and other clothes from the olden days walk around in the distance. Above the game's reels is the logo, and below is the Megaways counter, telling the player how many ways to win there are on each spin. Each reel can have between 2 and 7 symbols on each spin, giving the player up to 117,649 ways to win. You make a win by landing at least 3 of the same symbols on adjacent reels, starting with the first one to the left. The winning symbols will disappear, while new ones drop down, giving you a chance to land consecutive wins on the same game round. You can play the game on mobile phones, notepads, and desktops.

The lower-paying symbols are classic vampire objects such as garlic, crossbow, dagger, Bibel with a cross, and potion bottle. They are identical to the symbols from the first Blood Suckers, except for the dagger, which is a new addition. These five symbols pay between 0.4X and 0.6X the bet for a 6-of-a-kind win. The higher-paying symbols are 2 female and 3 male vampires. They are also the same characters from the first game, with the addition of an extra female vampire in this Megaways adventure. The vampires will give you between 0.8X and 3X the bet for a win containing 6 symbols. There are also a Wild Symbol and two Super Wilds, substituting all symbols except the Scatter.

What is the max win in the slot Blood Suckers Megaways?

What features are available in the slot Blood Suckers Megaways?

All winning symbols will disappear whenever you make a win, and new ones fall from above. If you're able to make a new win when the reels are refilled, those involved symbols will also vanish and make room for new ones. These cascades continue as long as you can make winning combinations, all belonging to the same game round.

The regular Wild Symbol is the same character as in Blood Suckers, a vampire biting the neck of a blond woman. It substitutes all regular paying symbols but not the Scatter. There are also two Super Wilds that appear on reels 2-5 in the modifiers. It's the crossbow-armed vampiress Amilia from Blood Suckers 2 and an older man, also holding a crossbow. The Super Wilds cover an entire reel, substitute all symbols except the Scatter, and have a multiplier of up to 7X.

Even the Scatter Symbol, a vampire in a wedding dress with blood around her mouth, is the same symbol as in Blood Suckers. Landing 3 or more Scatters anywhere triggers the free spins, and you get to pick a modifier coffin for each Scatter before the feature starts.

A Random Modifier can trigger on any spin in the base game and free spins. A coffin appears and reveals Random Wilds, Super Wilds, Bonus Scatters, or a Win Multiplier.

One or both Super Wild characters land on reels 2, 3, 4, and 5. The Super Wilds cover the entire reel they land on and have a win multiplier of up to 7X.

Two, three, or four Scatter Symbols are added to the reels, significantly increasing the chances of triggering the free spins.

A random multiplier of 2X, 3X, or 5X will be used on all wins in the spin.

The Free Spins start by presenting 10 coffins, and the player gets to pick 3, 4, or 5 of them depending on the number of Scatters that triggered the feature. Each chosen coffin will open, and the vampire in it will be killed by a wooden nail through its heart before one of four modifiers is awarded. The coffins contain:

Win Multiplier = A Win Multiplier of 2X, 3X, or 5X will be applied to all wins. At least 2 multipliers will be added during the feature, and they don't reset in between. There are 3 coffins containing multipliers.

The Free Spins start as soon as you have picked your coffins and the modifiers will be activated at the start of each spin. Modifiers that haven't been awarded in a coffin can also trigger randomly during the free spins. It's possible to reach a Win Multiplier of up to 10X the bet.

You can buy the modifiers and the free spins. Paying 10X the bet will get you the base game modifier coffin, awarding Random Wilds, Super Wilds, Bonus Scatter, or Win Multiplier. For 150X, 500X, and 1000X the bet, you can purchase the free spins with 3, 4, or 5 coffin picks.

It may seem weird that NetEnt, after producing two very popular Blood Suckers games, gives Red Tiger the developing rights of Blood Suckers Megaways. No one has to worry, though, because Red Tiger can be nothing but proud of this game. It takes back the scary feeling with bloody animations that were reduced in Blood Suckers 2. You will recognize all the characters from the first game and a couple of new ones. You'll also get to meet the vampire Amilia again, in the shape of a beneficial Super Wild.

The graphics and animations are great. It's not the most advanced graphics we have seen, but they suit the game perfectly. The base game modifiers, which actually can trigger in the free spins, too, help make every spin exciting. The previous games have two bonus games, where picking coffins or treasure chests award prizes. Blood Suckers Megaways goes all in on the free spins and puts great modifiers instead of cash prizes in the vampire coffins.

The action is also raised in this Megaways slot with high volatility compared to the previous games' low volatility. It becomes very obvious looking at the max win that has been raised several times to 20,521X the bet. The RTP of 97.66% is also amazing, almost as high as in the first game and quite a bit better than in Blood Suckers 2.

This is a slot that preserves previously beloved elements and spices up the gaming experience even further with appreciated additions. The first version came as a magical surprise, with its sequel not living up to the same potential, but now they come back with an absolute banger. As the saying goes, third time's a charm, and that is certainly stated within this slot that turns the gaming experience up another notch.

Blood Suckers Megaways takes the classic vampire-killing casino slot and turns it into a highly volatile adventure with a max win of over 20,000X the bet.