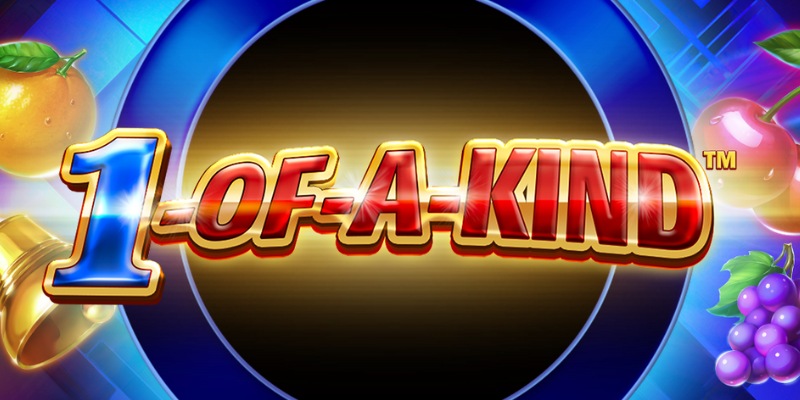 1-Of-A-Kind is a new casino slot from Playtech with an extraordinarily unusual grid. This game could be used in encyclopedias to define the word “simplicity”. Playtech has always been an interesting provider with their odd yet satisfying games. One could argue that it feels like a lazy product, but we choose to look at it from another angle. Despite its extreme simplicity, we never see games like this, making it quite innovative, eh? Let’s take a look!

We wouldn’t advise you to play this game when drunk, as an ever-rotating background is in play. However, it actually creates a really cool environment. We’re not entirely sure what it’s supposed to depict, but we imagine it’s some sort of spacecraft. Not only because it looks like that, but there are also stars floating on the screen, so space seems like the location. The game itself is placed in a rather small circle in the middle, allowing the environment to breath.

The game can be played on all common mobile devices and desktops. A winning combination is created by landing a full symbol in the wheel.

The lower-paying symbols consist bananas, watermelons, cherries, grapes, lemons, oranges, and bells. Landing one of these will pay 0.2x-1x the bet. The higher-paying symbols include bar, 7, double-bar, double-7, triple-bar, and triple-7. Landing one of these pays 2x-40x the bet. Scatters and Jokers can also land, activating various features. Let’s take a look at them!

What is the max win in the slot 1-Of-A-Kind?

What features are available in the slot 1-Of-A-Kind?

Whenever you land a paying symbol, you have a chance to randomly activate the Multiplier Booster. You’ll get to spin a wheel, where your win will be multiplied by up to 25x.

This feature is activated in the same way as the regular Multiplier Booster. However, when your win has been multiplied, the multiplier on that wedge will be removed. This will keep on going until you don’t land on a new multiplier. Keep in mind that it is only your original win that will be multiplied, so the wins does not multiply eachother.

The Level Up feature can be activated randomly when landing a win. Once again, you’ll spin a wheel, this time containing regular numbers. If you landed a banana, which is the 1st and worst symbol, and you get a 4 in the wheel, you’ll receive a lemon instead, which is the 4th symbol in the paytable, thus paying more.

If you land a Joker symbol, the Joker feature will be activated, and once again, you’ll spin a wheel. Your goal is to collect 3 blue Joker symbols, awarding you the minor jackpot of 50x the bet. You’ll then proceed to the next wheel, where you want to collect 3 green Jokers, awarding you the major jackpot of 500x the bet. Lastly, landing 3 red Jokers in the last wheel will award you the grand jackpot of 10000x the bet. Unfortunately, we don’t have info or footage of this, so it’s unclear how you get knocked out, but we assume there is some sort of “X” wedge on the wheels.

Landing a Scatter symbol will allow you to spin the Free Games wheel, awarding you either the Fruits Free Game (purple) or Respin Free Games (blue).

Landing the Free Games wheel on the purple section triggers 10 Fruits Free Spins. 5 symbols will be displayed over the game frame. If any of these symbols land in view during the Fruits Free Games, the corresponding icon will be removed. If all 5 Icons are removed, the feature is retriggered with 10 spins.

1-Of-A-Kind, is, in many ways, just what the name proposes. You only need 1 symbol to make a winning combination, so there’s that, but it is also really one-of-a-kind. We’ve never seen something quite like this, and that’s both a negative and a positive. Of course, we love innovative gameplay, and regardless of whether you like it or not, this is something different.

When going into this game, we expected a really simple game, and it probably is once you get the hang of it, but the info section was a bit confusing, and we didn’t manage to land all the features, so we apologize if some of our explanations weren’t 100% correct. However, we like that the game wasn’t as straightforward as we had thought, as it adds an interesting aspect to the gameplay.

1-Of-A-Kind by Playtech is a 1-reel, 1-row game with plenty of interesting features to take part in.