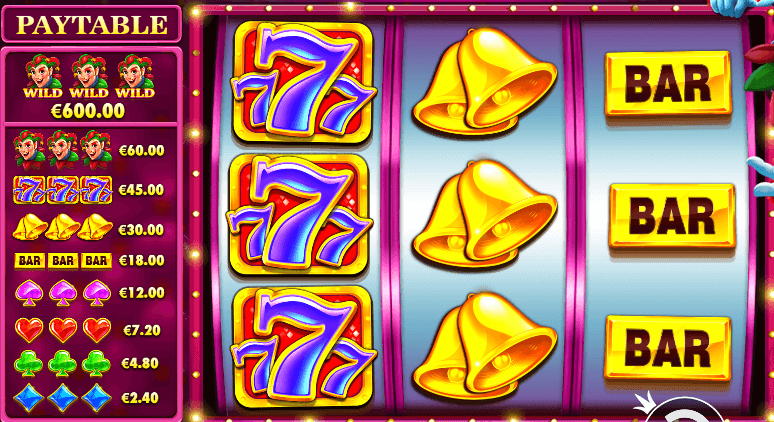 Fans of the classic, Las Vegas-style, online slots players will definitely enjoy Triple Jokers slot crafted by Pragmatic Play. As expected from the game’s title, this is a classic slot game packed with 3 reels, 5 paylines and highly volatile gaming actions for more fruitful winnings. While the game is a classic slot, its bonus features are doubtlessly on a more modern side as the Triple Jokers slot comes packed with stacked wilds, re-spins, and much more we rarely seen in classic games.

It should be noted that the game is playable across all gaming devices including mobile devices, laptops, and desktop computers from just 0.05 up to 25 credits per spin. The game does not waste time on introductions, but players are immediately greeted with a quirky jester and the show begins. Fans of bonuses-packed games should explore other Pragmatic Play releases such as Money Madness, Chilli Heat, Triple Tigers, Wolf Gold, 888 Dragons and Panther Queen.

In this massively volatile Pragmatic Play release, punters can score extremely generous riches as soon as they join a smiling jester on its adventure. In addition to being very rewarding, the Triple Jokers slot is also visually appealing even though there is nothing complicated here in terms of its gameplay and design. The game’s reels are very plain, resembling those old-school vintage one-armed bandits.

On the reels, players come across dancing symbols including lower-valued spades, hearts, clubs, and diamonds. More generous riches can be scored by landing sevens, bar signs and bells which are worth 40x, 20x and 10x bets for landing three matching symbols on the reels. Naturally, the most rewarding symbol in the Triple Jokers slot is the Joker symbol. Once players land three Joker symbols on the reels, they score winnings worth up to 60x their stake.

Even though the game features one bonus mode, it definitely has great winning potentials. This mode is the Triple Jokers Respin Until You Win mode. In order to activate this mode, punters have to fill all three positions in one reel with the smiling Joker symbols. Once there, all of the Joker symbols transform into wild symbols which remain locked in their position while the reels spin. Landing more Joker symbols during this mode also turns them into wilds.

With this mode triggered on, players can score more generous winnings which go up to 200x their stake for landing three Joker symbols on a payline. Those players who during their Triple Jokers gameplay fill all three reels with stacked wild symbols can score winnings worth up to 1,000x their stake.

Triple Jokers slot is a high volatile slot with an RTP of 96.51%. Fans of high reward gameplay packed with thrills can try the game soon as it is set to be released on the 5th of June.