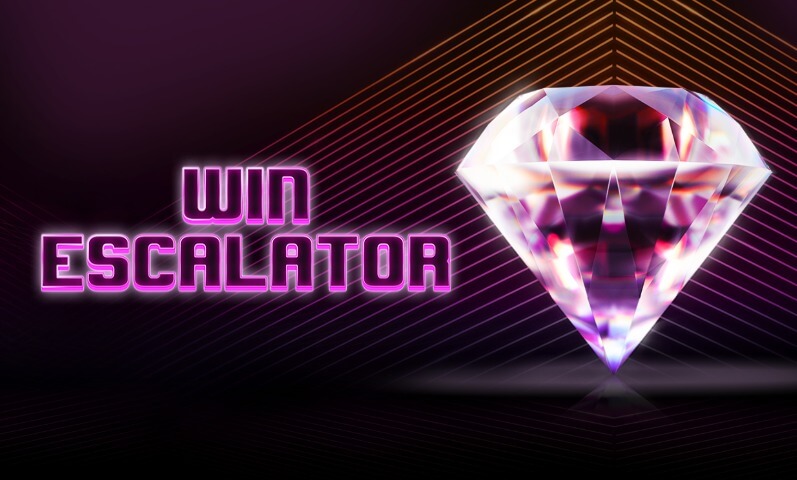 With the latest Red Tiger Gaming release, the Win Escalator slot, players get to escalate their winnings to 850x their stake. The game is actually another Red Tiger Gaming release packed with expanding wild symbols which as usually boost winning opportunities and bring more winnings. The game allows bets from only 0.10 up to 100 credits per spin, so it is suitable for every bankroll even the smallest one.

The Win Escalator slot features a retro gaming grid with 4 reels and 8 paylines. As players hop aboard this diamonds-packed slot game, they come across fruity symbols which once landed in matching positions surely bring juicy winnings. Besides these regular symbols, there are unique wild symbols included as well which once landed on the reels drop down by one position.

Another interesting mode featured in the Win Escalator slot is its expanding reels bonus which triggers as soon as players trigger the game’s Free Spins feature. Players who want to try some other Red Tiger Gaming release should consider hopping on their online gaming adventures with Mega Dragon, The Equalizer, Thor’s Lightning, Pirates’ Plenty, Mayan Gold, Tiki Fruits, Treasure Mine, Dragon’s Luck, and Lucky Wizard.

Looks wise, the Win Escalator slot looks beautifully rendered with an interesting, glossy look added to the game’s symbols. On the reels, punters will come across nine classic symbols including horseshoes, bells, stars including melons, grapes, oranges, lemons, and cherries. The most rewarding symbol here is the lucky 7 that awards payouts worth 15x or 40x players’ stake for landing three and four matching symbols on a payline.

The Win Escalator slot’s wild symbol is depicted as the white diamond which replaces regular symbols except the game’s scattered free spin symbols. Moreover, landing four wild symbols on a payline yields winnings worth up to 40x players’ stake. Whenever wild diamond symbols appear on the reels, they lock in their position and drop down the reels by one position. This repeats on the next spins until wilds fall off the game’s screen. This is known as the Diamond Wilds bonus.

In order to trigger the Win Escalator slot’s Free Spins bonus, players have to land at least three free spins symbols on the same spin. Besides getting 10 free spins, with this bonus feature players also get one extra free spin for every wild diamond symbol landed on the reels.

In the case of a massive arrow appearing on the reels, the game’s reel set expands to include up to five extra rows active during the free spins mode. This is named the Expanding bonus. The Win Escalator slot is a low to medium variance game with an RTP of around 94%.