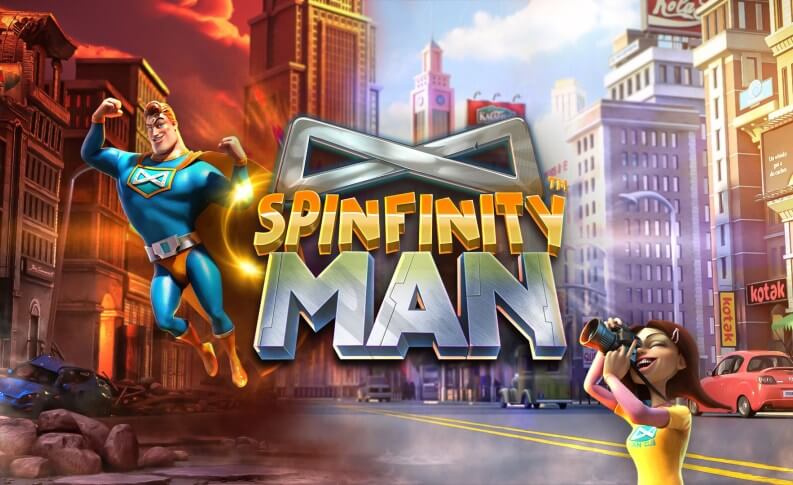 BetSoft has recently released an interesting, superhero-themed game, Spinfinity Man slot packed with impressive 3D graphics and loads of bonuses. The game features a classic battle story between a villain and a superhero. While the story itself is not that authentic, the game’s characters, bonuses and everything else included is definitely unique and different.

Spinfinity Man features a massive 7x7 gaming grid packed with cluster pays, so there are paylines included. In order to score winnings, players need to form clusters of four or more matching symbols included. As in other games of this kind, winning symbols explode making a place for other symbols to take their place which can lead to consecutive winnings.

In Spinfinity Man, players can take advantage of Super Wilds and Wilds as well as superpowers triggered as soon as Spinfinity Man himself appears on the reels. Fans of visually impressive games loaded with bonuses should definitely explore other BetSoft Gaming releases such as Greedy Goblins, Dragon Kings, Jumbo Joker, Tiger’s Claw, Reel of Wealth, The Golden Owl of Athena, Stampede, Legend of the Nile, Good Girl Bad Girl and WhoSpunIt.

As previously mentioned in this Spinfinity Man review, the game is all about superhero characters. In terms of its visuals, the game looks amazingly well rendered packed with state of art 3D graphical solutions which definitely add more fun to every gaming session. The gaming grid framed in laser beams is set on the streets of Metropolis which are plagued with criminal activities and ruled by the main villain in the game, Mr.X.

It is up to players and the Spinfinity Man to use their superpowers to finally free the city and become the ultimate savior of its residents. Thanks to the game’s Super Wilds, special Power features and other bonus modifiers, players can scoop winnings worth up to 5,038x their stake. Spinfinity Man slot features several Super Power Combos which trigger once 2x2-sized Spinfinity Man symbols land on the reels. At this point, the game awards one of five bonus modifiers which make room for new symbols to land on the gaming grid and potentially result in consecutive winnings.

During the Super Power Combo mode can destroy two symbol columns, burn away two columns and two rows, shatter smaller symbol clusters, shatter larger symbol clusters or remove all instance of one randomly chosen symbol from the gaming grid. The Spinfinity Man slot also features another interesting bonus mode, the Villian Trail which is displayed on the right side of the gaming grid. This Villain Trail gradually increases by every Mr.X symbol landed on the reels.

Once the Villian Trail reached ten symbols, the game awards players with 10 free spins. It should be noted that during this bonus mode, those special 2x2 Spinfinity Man symbols become 2x2 Mr.X symbols which trigger the same extras as the Spinfinity Man triggers in the base game.