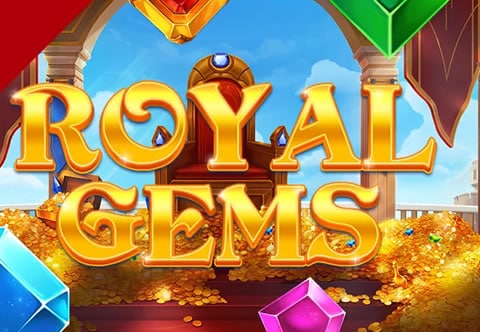 With the Royal Gems slot powered by the Red Tiger Gaming software, players get to raid the massive royal room packed with all sorts of treasure and riches. The game also has a unique, Tetris-like gaming layout packed with an 8x8 grid. Here, players create winning combos by landing matching clusters. During their gaming session, players can enjoy all sorts of bonuses including a great 2x boost which comes along once players fill the entire gaming screen with winning symbols.

With the Royal Gems slot, Red Tiger Gaming definitely continues its creativity and innovation path. Besides enjoying the game’s appealing visuals, players get to also take advantage of a variety of cool bonus features. Since the game relies on the popular Cluster Pays gaming engine, there are more winning opportunities offered.

Royal Gems: Loads of Re-Spins among Other Surprises

The winning combinations in the Royal Gems slot are formed by hitting clusters of matching symbols. These winning symbols once landed on the reels lock in their place while players are rewarded re-spins that follow. The setting of the game matched its theme as it depicts a medieval castle and all sorts of the treasury in the backdrop. Backed by gold coins and other riches, players will come across red, purple, blue and green gemstones that appear alongside spade, club, diamond and heart symbols.

These newly winning symbols also remain locked in their position and the entire process starts again. In other words, the Royal Gems slot’s re-spins remain coming for as long as new winning combos are landed on the reels. This feature is known as the game’s Locked Clusters mode. Landing winners on all sixty-four reel positions brings a great 2x winning boost which is known as the game’s Full Screen mode.

On every spin, the game may bring premium-valued gemstone symbols as oversized 6x6, 3x3 or 2x2 symbols that naturally bring more winning opportunities. This is known as the Royal Gems Super Gems mode. During their gaming sessions, players are advised to keep an eye on the special crown symbols as these symbols trigger the game’s Crown Upgrade mode which upgrades clusters to include higher-valued symbols.