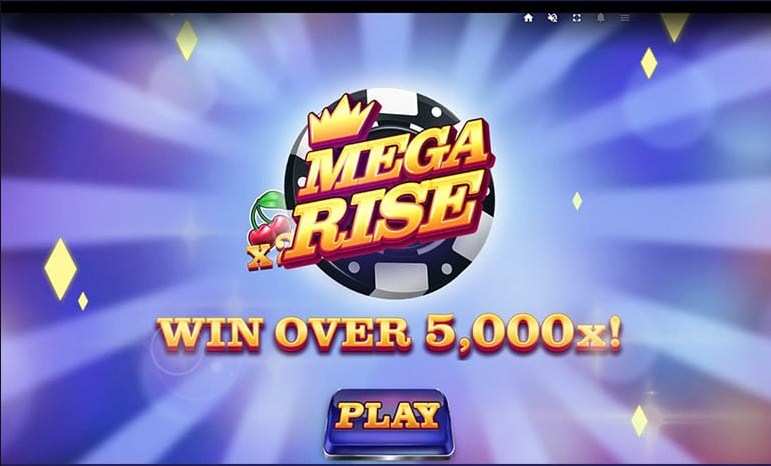 The Mega Rise slot running on the Red Tiger Gaming inspired by the hallmark of fruity, classic slot machines brings loads of riches across its simple gaming setup of just 3 reels, 5 rows and 5 paylines. The game’s simplicity in addition to its extremely fast-paced spinning actions is what makes it extremely intriguing.

While the Mega Rise slot may appear a bit too basic for some players, others who enjoy straightforward gaming sessions will definitely enjoy the game. The Mega Rise slot features highly volatile spinning actions with an impressive increasing winning multiplier for maximum winnings for up to 6,375x players’ stake.

As expected from the game’s theme, its gaming grid includes loads of classic symbols that have been present around for many years now. In addition to its classic vibes, the Mega Rise slot also adds a bit of modern touch with its extras. All in all, fans of traditional games who want to enjoy a greater level of fun added to their online experience will appreciate this Red Tiger Gaming release.

In this exciting, feature-packed Red Tiger Gaming release, players come across a great selection of familiar symbols including watermelons, cherries, oranges, lemons and other that appear across the game’s flashy blue reels set against an interesting, 3D effect-packed backdrop. During their gaming sessions, players will notice that there is a multiplier bar located on the right side of the reels. This is the main highlight of the Mega Rise slot.

In order to get started, players choose their betting level starting from 0.20 credits up to 20 credits they are allowed to invest per spin. The Mega Rise slot also gives players the option to spin its reels automatically while its Turbo Mode is used for speeding up the spinning action. The game’s RTP standing at 96.08% also impresses while its medium to high volatility spinning actions bring a great balance between the winnings’ value and winnings’ frequency.

The Mega Rise slot’s bonuses are doubtlessly impressive for such a simple, three-reeled game. The most rewarding symbol featured in the game is the lucky seven bringing winnings worth up to 75x players’ stake for three matching symbols on a payline. As soon as players scoop a winning combo, those winning symbols enter the Power Bar whose winning multiplier value increase by one time. In the case of landing a winning combo packed with a symbol that is already contained in the bar, the payout gets immediately boosted by the displayed winning multiplier.

Moreover, that winning symbol remains in the power bar while the winning multiplier increases by one time.  This is the game’s main bonus feature named the Rising Multiplier mode. These generous winning multipliers are in the game for as long as that specific symbol contained in the bar is active. This means that other winning symbols can push out that symbol and take its place in the bar.