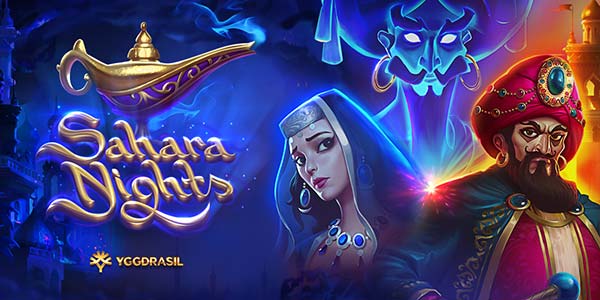 With the upcoming Yggdrasil Gaming release named the Sahara Nights slot, players get to travel into the desert to enjoy a unique gaming adventure. The game is another gorgeous release which tells the story of Aladdin which is one of the most popular Middle East folk tales. The story emerged in The Book of One Thousand and One Nights.

With the game, players can scoop remarkable riches across 5 reels and 20 paylines. The Sahara Nights slot is accessible via every device from 0.20 up to 100 credits per spin which is a fairly standard betting range. In terms of its bonuses, the game is packed with expanding wild symbols, sticky wild reels, scatters which trigger free spins and awesome winning potentials with payouts worth up to 3,500x players’ stake.

Sahara Nights: Packed with Remarkable Winning Potential and Much More

The game’s developer did such a great job with the Sahara Nights slot which can help players finally awaken their inner genie. Set across 20 mystical paylines, the game’s visuals look beautifully rendered just as expected from Yggdrasil Gaming. As suggested by the game’s name, here players are taken to the stunning Sahara Desert or more specifically to a stunning hidden temple.

There is an interesting Arabic vibe added while the game’s oriental soundtrack matches its visuals perfectly. The game’s reels come packed with red, blue, green and orange gemstones as well as goblets, swords and three human characters which look like the Sultan, Princess, and Aladdin. The Sultan symbols are the most rewarding as they bring prizes worth up to 175x players’ stake.

During their gaming sessions, punters should keep an eye on the game’s genie’s lamp wild symbols as these bring more winnings by replacing standard symbols. It should be noted that these wild symbols land only on reels two, three and four and as they do so they can expand to cover all positions on the reels. Once wild symbols are expanded, they turn reels into wild reels in the process known as the Genie Wilds mode.

The Sahara Nights slot also comes packed with a Free Spins bonus that players trigger by landing at least three of the game’s scattered free spins symbols. Here, players can scoop up to 16 free spins as well as enjoy awesome payouts worth up to 1,000x their stake. Once this Sahara Nights slot’s Free Spins bonus is triggered, players get transported to another gaming screen packed with riches.

Here, those wild symbols land only on the three middle reels and they also expand. Moreover, these wilds also turn into sticky wild symbols which remain in their position for the duration of the bonus. Landing three wild symbols brings two extra free spins. The Sahara Nights slot is a medium to high variance with an RTP of 96.2%.