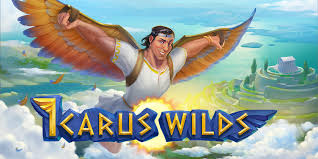 Packed with three types of wilds, awesome payouts and an interesting theme, the Ikarus Wilds slot powered by Sthlm Gaming surely deserves players’ attention. The game will be released on the 10th of March and it comes with a medium to high volatility and a great RTP of 96.54%. Needless to say, the game is inspired by Ikarus who in Greek mythology is the son of Daedalus.

The story about Ikarus is rather tragic as drowned following his attempt to fly close to the sun after the sun melted his wax wings. Like the majority of other games by the developer, the Ikarus Wilds slot comes packed with 5 reels, 3 rows, and 243 paylines. The maximum winnings offered here go up to 16,864x players’ stake.

As mentioned at the beginning, the Icarus Wilds slot comes packed with three wild symbols as well as a rewarding Ikarus Free Spins bonus. Before the game hits the industry, there is a bunch of other Sthlm Gaming releases to check out such as The Golden Chase, Perfect Catch, Sunset, Casino on the House, Ricky Riches Booster Reel, Boost It, Van Gogh and Sacks of Riches.

In the Ikarus Wilds slot, that familiar character of Ricky Riches from other Sthlm Gaming slots appears as fearless Icarus as he tries his best to leave Crete. The game’s backdrop depicts a blue sea from a big height and this is Icarus’ view before his way wings are destroyed by the sun. The game features a bunch of ancient Greece-inspired elements that match its theme. The game’s reels feature cartoonish symbols including lower-valued standard playing cards, as well as higher-valued tools, pots, golden wreaths, wings, and helmets.

During their gaming sessions, players will scoop winnings worth up to 100x and 200x their stake for landing five of the game’s wreath and helm symbols respectively. The main attractions of the Ikarus Wilds slot are of course the game’s wild symbols. There are there different wilds featured here that come in three forms of special Flying Wilds including Multiplier, Locked and Nudging Wilds.

Then, the game’s Locking Wild symbols come with numbers depicted in the top right corner. The number they come attached with determines the number of spins that they will remain locked in their position before they start moving in the form of Nudging Wilds. The Ikarus Wilds slot is also packed with a Free Spins bonus which triggers as soon as players land the game’s scattered gold coin symbols in any position on the reels.

During this bonus mode, the game adds one extra row and the number of paylines increases to 1,024. The Free Spins bonus continues for as long as Flying Wilds land on the bottom row of the game. In other words, players get to enjoy free spins for as long as there is at least one wild on the gaming grid.