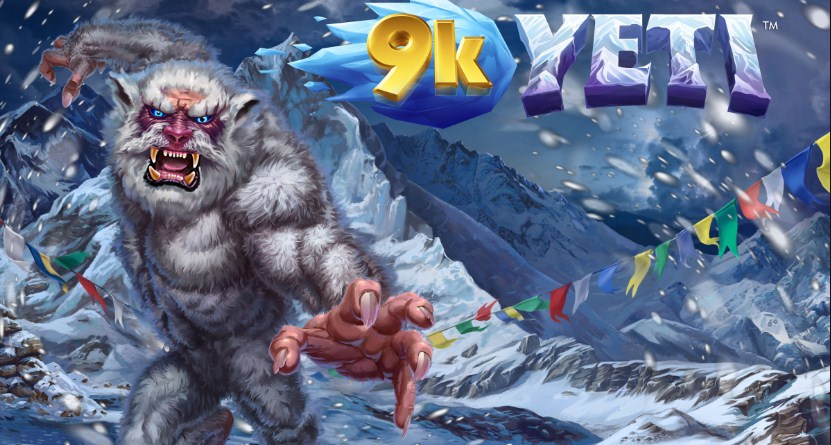 The 9k Yeti slot is an interesting game crafted by the 4ThePlayer production studio, which is one of the latest Yggdrasil Gaming’s business partners. This release features a unique gaming setup packed with 6 reels and a total of 4,096 paylines. The game is playable from every gaming device from only 0.10 up to 25 credits per spin on tablet, smartphone and desktop devices.

The game will be released on the 14th of November and what we know so far is that it features an interesting Snowstorm Feature as well as a Free Spins mode. Moreover, the 9k Yeti slot is a highly competent game packed with highly volatile spinning actions, a great RTP of 97% and awesome maximum payouts which go up to 9,012x bettors’ stake.

In order to present this game, the small London-based company teamed up with one of the leaders in the industry Yggdrasil Gaming to ensure awesome gaming sessions. As suggested by the game’s name, it is inspired by the mesmerizing Mount Everest height and unique creatures that reside there. In addition to this release, the game’s developer had three more titles coming soon including 1 Left Alive, Zeus-vs-Thor and Shark.

In terms of its visuals, the 9k Yeti slot appears beautifully rendered packed with top-notch graphical solutions which make the game very appealing. Considering its theme, there is no surprise that the remarkable heights of Mount Everest are neatly depicted in the backdrop. Symbols featured on the reels including royals which are lower-valued and more rewarding tents, ice axes, climbing ropes, mountain climbers and Sherpas which guide mountain climbers.

There is also the Yeti symbol which is the most rewarding here bringing winnings up to 8,8x players’ stake for six symbols on a payline. There are also wild symbols depicted as Mount Everest which replaces regular symbols on the reels. As previously mentioned, the 9k Yeti slot features two bonus modes including its Snowstorm Free Spins feature that players trigger with at least three of the game’s scattered footprint symbols landed in any position.

During the Free Spins bonus, players should keep an eye on the wild symbols and on the Yeti symbols which once landed together on the same spin, they trigger the Snowstorm Feature. Once this happens, a massive snowstorm lifts one or more of the wild and Yeti symbols and shuffle them with other landed symbols to bring a guaranteed winning combo. In other words, this feature turns non-winning spins into winning spins.