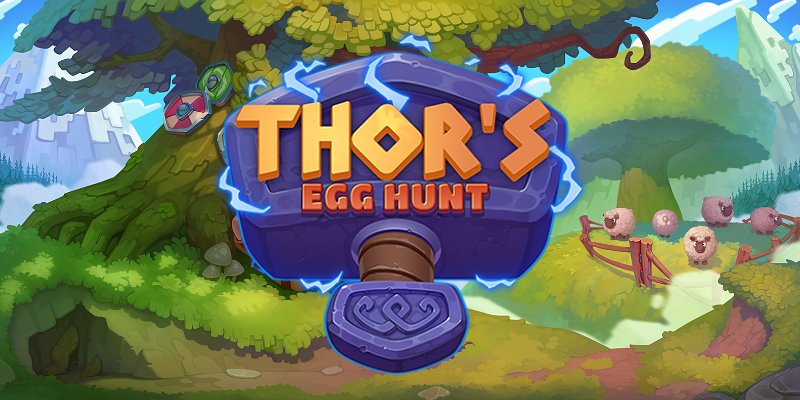 Thor's Egg Hunt is a new casino slot from Gamevy with a Viking theme. The game developer has made their own interpretation of the Norse god Thor, with an axe-waiving, almost toothless red-bearded Viking, resembling the characters in the cartoon Asterix. If it wasn't for the presence of Mjölnir, the hammer of Thor, in the logo and on the reels, we wouldn't have made the connection to the Norse god.

Wins are made by landing 4 or more symbols in clusters connected horizontally or vertically. Every win triggers a cascade, where new symbols fall down, giving you another chance to score more wins. There's also a multiplier that increases for every cascade, potentially paying big times. On top of that are free spins and a boss fighting feature, where a bonus wheel can award up to 2000X the bet.

Thor's Egg Hunt is a video slot from Gamevy with 6 reels, and 6 rows. There are no regular paylines; wins are instead made by landing 4 or more symbols in a cluster, connected horizontally or vertically. The Min.bet is 0.2, and the Max.bet is 20. Gamevy gives the player an incredibly good RTP of 97.50%, and the volatility wasn't released when we tried the demo. The max win is capped at 5000X the bet, and the hit frequency is 39.06%.

Thor's Egg Hunt is set in an idyllic landscape with green hills and trees and sheep in the background. The reels are placed in a wooden square in the middle of the screen, and to the right stands what we suppose is Thor. He's holding a shield and an axe and moves from side to side. The music is a happy piano tune with whistling high pitch flutes. On top of the reels are five animals representing bosses you can beat by landing different symbols. Beating a boss will trigger the Jackpot Wheel.

To make a win, you need to land at least 4 of the same symbols in a cluster, connected either horizontally or vertically. Even Scatter Symbols need to be in a cluster to trigger the free spins. In other words, you can't activate the free spins by landing Scatter Symbols anywhere on the reels as in most other casino slots. Even the Scatters need to be connected horizontally or vertically. The game is available on mobile phones and all other sorts of devices.

The Scatter Symbol can trigger up to 22 free spins, and a Bonus Coin Symbol can award up to 5 picks in the cash bonus chest feature. A Battery Symbol causes a large explosion, and the animals on top of the reels can trigger the Jackpot Wheel feature.

What is the max win in the slot Thor's Egg Hunt?

What features are available in the slot Thor's Egg Hunt?

Every time you make a win, the involved symbols will be removed to make room for new ones dropping from above. If you're able to make a new win, the symbols will once again be removed while new ones are added. The cascades continue as long as you make new wins, all belonging to the same spin.

On each cascade, a win multiplier will increase by +1. The multiplier starts at 1X on all spins in the base game. It doesn't reset between free spins.

The Bonus Coin Feature awards the player with 2-5 picks depending on how many Bonus Coin Symbols were used to trigger the feature. The player gets to pick among chests, where every chest awards a cash prize.

The Battery Symbol awards wins up to 18X the bet. It also causes a large explosion, destroying any adjacent symbol.

The cascading multiplier starts at 1X in the Free Spins but doesn't reset between spins. Your chances of hitting big wins become greater for every cascading win. The feature can also be awarded on a spin on the Jackpot Wheel. The feature is over when the player runs out of spins, or if the max win of 5000X the bet is reached.

There are 5 animal bosses on top of the reels, each one connected to one of the eggs. To beat a boss, you have to land between 20 and 65 of its corresponding egg shown on the meter. Defeating a boss by matching symbols until a meter is filled will trigger a spin on the Jackpot Wheel.

The Jackpot Wheel triggers whenever you manage to defeat a boss. The wheel has 5 segments, awarding free spins or one of the 4 prizes Mighty, Epic, Legendary, and Mythical. The available prizes grow larger the bigger the boss you beat. This is how much each segment can award:

Mighty Prize = Cash Prize between 4X and 8X the bet.

Legendary Prize = Cash Prize between 50X and 250X the bet.

We have no idea what the Norse god Thor has to do with eggs, but it's a cool game Gamevy has put together. The eggs could be mistaken for Easter eggs, or maybe that's what they were supposed to look like from the start before the game developer realized it was not the season. Just like in games such as Azticons Chaos Clusters and Retro Tapes are wins made by connecting symbols in clusters horizontally or vertically. Thor's Egg Hunt awards wins for every combination of 4 or more symbols, while most other cluster games usually require at least 5 symbols. You should also note that even Scatter Symbols need to land in clusters to activate the free spins.

Cascading wins are common in these types of games, and we appreciate the multiplier that grows for every cascade. It becomes even better in the free spins, where the multiplier never resets between spins, raising the chances for bigger and bigger wins as the feature goes on. The Boss Fighting feature is another innovative move, although there isn't a lot of fighting going on. The game developer could have done more to the graphics to make the feature come alive. After beating a boss, you can win up to 22 free spins or 2000X the bet in cash prizes.

We don't know the game's volatility, but it feels high when spinning the reels. The max win of 5000X the bet isn't the main reason to spin the reels, although it's, of course, a huge win. On the other hand, the RTP of 97.50% is absolutely amazing, over a percentage point above the regular casino slot.

Thor's Egg Hunt from Gamevy is an exciting cartoon-looking cluster game with both free spins and a Jackpot Wheel.