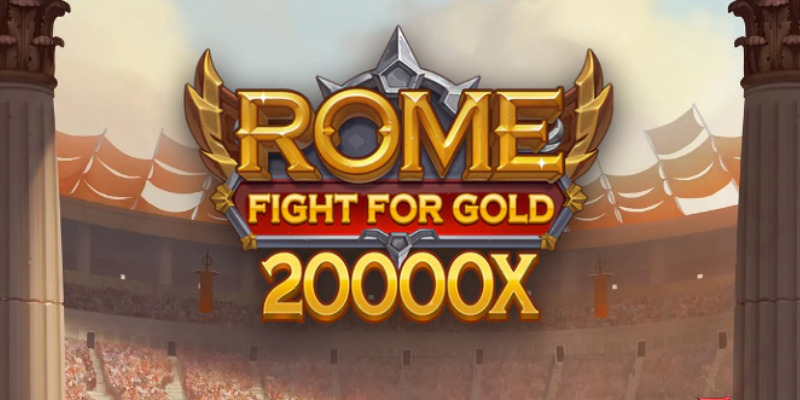 Rome: Fight For Gold is a new casino slot from Foxium where we travel to the Colosseum to fight for our lives…and gold. They say that all roads lead to Rome. Foxium has taken us from a gorgeous ranch in Oink Farm, a grim future in Agnes Mission: Wild Lab, the vast deserts of Africa in Akiva: Claws of Power, and now, to Rome. Foxium is an exciting provider for which we see a lot of potential. They have a fantastic graphical team, producing better-looking games than most small studios out there. Attractive visuals can make a dull game enjoyable, making the gameplay less critical. But to perfect a game, you need both. Let’s see if Rome: Fight For Gold does!

Rome: Fight For Gold is a video slot from Foxium that features 5 reels, 4 rows, and 40 paylines. Players can choose between a Min.bet of 0.20 and a Max.bet of 24. The game has an RTP of 96.10% and a hit frequency of 27.19%, meaning you can expect a winning combination on more than every 4th spin, on average. Rome: Fight For Gold has medium volatility and offers a huge max win of 20.000x the bet.

Getting thrown into the Colosseum is no easy task, but Foxium will provide you with the tools necessary to emerge victorious from the battle. The features are Wild Symbol, Scatter Symbol, Collect Feature, Bonus Feature, and Boost.

The game takes place between two pillars in the Colosseum. The Colosseum was used as a fighting ground in ancient Rome. Slaves or serious criminals often constituted the fighters, who had parlayed their death sentences into a life in the arena. Researchers say that only 1 in 10 battles ended in a death, so the fights weren’t as cruel as some say, but it was still a crazy event. Thankfully, you don’t have to parlay your life in this slot. However, the crowd is roaring, and thrilling music is playing, so it’s not for the faint of heart!

You can play this game on all common mobile devices and desktops. A winning combination is created by landing 3 or more matching symbols on consecutive reels within the game’s lines, starting from the leftmost reel.

The lower-paying symbols include the classic royals: 10, J, Q, K, and A. Five-of-a-kind with one of these symbols will pay 1x-2x the bet. The higher-paying symbols are made up of a shield, helmet, Helena, and Antonius. A full line of 5 with these pays 3x-10x the bet. The Wild symbols can substitute for other symbols to complete more winning combinations. Coin prizes are collected by landing a purse on the last reel, and 3 or more Scatter symbols trigger the Bonus Feature. Let’s take a closer look at the features!

What is the max win in the slot Rome: Fight For Gold?

What features are available in the slot Rome: Fight For Gold?

The Wild symbol act as a joker, enabling more winning combinations by substituting for other paying symbols.

Scatters appear on reels 2, 3, and 4. Landing 3 of these will trigger the Bonus Feature.

Coins appear on reels 1-4. When a Collect symbol (purse) lands on reel 5, the total value of all Coin symbols is collected. The Collect symbol may include a multiplier of up to 5x and will multiply the total winnings.

Triggering the Bonus Feature activates 3 re-spins. Only Coin symbols and special Bonus symbols are active during this feature. Landing a new symbol will reset the spins, and coins that land will remain in position until the feature ends. The following special symbols are available:

Helena Extra Spin - Increases the reset value of the spins by 1 (4 re-spins instead of 3, etc.)

Activating Boost will increase the total bet by 50%. This enables more Coins, bigger average Coin rewards, multipliers for Collect symbols, and increases the chance of landing special symbols during the Bonus Feature.

Perhaps superlatives aren’t fitting for this game, but it’s an enjoyable game. Gameplay-wise, Foxium still has some way to go to be considered a tier-one provider. Still, they are up there with the best when it comes to creating gorgeous games with interesting themes.

Not being a tier-one gameplay provider doesn’t mean that the gameplay is bad, though. Foxium tends to borrow popular features but always makes sure to add some spice and put a personal touch on them. The Bonus Feature in this game is an example of that. At first glance, it may look like another Link&Win slot. However, the special symbols make it a unique feature. Special symbols have been seen in plenty of similar games, such as Money Train 3 and Chip Spin, but it’s all about creating a refreshing set, which Foxium has managed to do.

All in all, this is a game with exciting features, gorgeous graphics, good RTP, and a whopping max win of 20.000x the bet. Definitely worth a try!

Rome: Fight For Gold by Foxium throws you into the Colosseum, where you’ll have to fight your way toward the max win of 20.000x the bet!