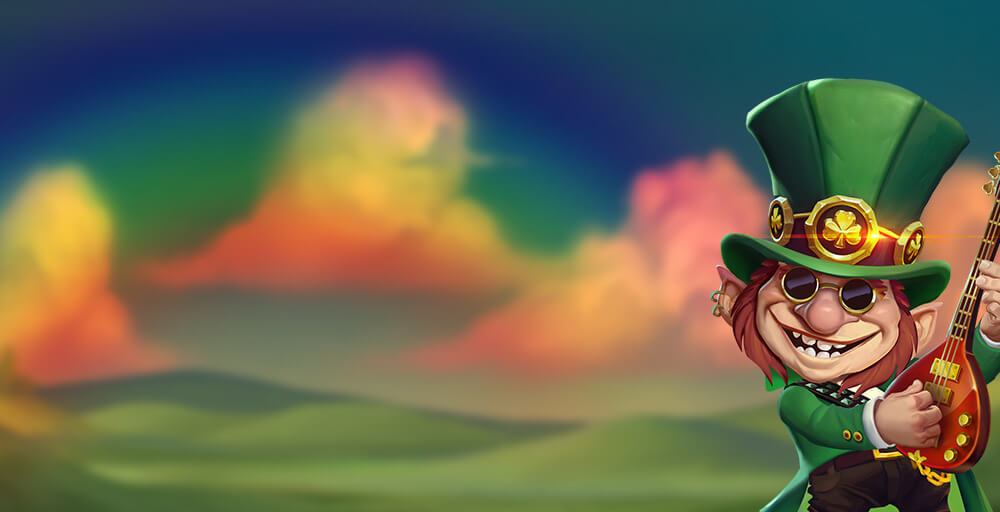 This colorful video slot, powered by well-known
, will awake your inner rock
and roll star with its fabulous Irish leprechaun called Ryan. The Rainbow Ryan
slot game has 6 reels, 4096 paylines, and
it’s playable on all devices. Ryan may be tiny, but the winnings he can bring, with
the help of two great features, are enormous. You’ll absolutely love this
music-themed video slot and the colors of the rainbow
will brighten up your day.

As
you enter the game you will notice that the reels are set against an outdoor
music stage full of huge speakers. Ryan is having so much fun playing the
guitar, and so will you. The winning reels are rainbow-colored, unlike the regular ones. Ryan is standing in
the bottom of the reels and he is excited to perform amazing solo riffs while
you’re spinning the reels. The Free Spins bonus game will delight you with its
sounds and visual effects. All in all, the graphics in Rainbow Ryan video slot
are at the high level, which is what we all expect from Yggdrasil. You know
that Ryan the leprechaun has a pot of gold hidden behind the rainbow and if he
believes you are his faithful fan, the treasure can be all yours.

This
adventure wouldn’t be the same without many outstanding symbols. They include 4
card suits: hearts, clubs, diamonds, and
spades, which are the lower-value symbols. You can increase your small payouts
by matching 3 card game suits in a row.

Don’t
forget Ryan’s personal stuff, such as the microphone, his boots, beer, and a
hat full of coins, which can pay off if you match 2 of them in a row.
Mentioning the Wild symbol is inevitable since this symbol can replace any
other, except the Free Spin symbol. This means your winning combination will
come much easier if you land a Wild symbol.

The rainbow after the
rain

Rainbow
Ryan video slot has two special features that are very profitable and will
certainly make you satisfied.

The
first of the two is the Rainbow Reels feature. This amazing feature can be
triggered randomly during any spin. The Rainbow Reels feature implies you will
have from two up to six synced reels with identical symbols, which is truly
helpful when it comes to forming winning combinations. If you are lucky enough
to get consecutive reels synced you’ll feel on top of the rainbow, and the
great thing is that the number of synced reels can only increase.

The
second special feature is called the Free Spin Mode, which is triggered when
you land three or more Free Spin Scatter symbols anywhere on this musical
reels. The maximum amount of free spins you can get is 20 and they are awarded
for finding 6 Scatter symbols. You’ll be happy to hear that the Rainbow Reels
feature can be triggered during the Free Spin mode, offering you synced reels
and winnings up to 2,000x your stake.

Find the hidden pot of
gold

Rainbow
Ryan video slot has a potential to make your
wishes come true, thanks to the leprechaun who is always there to help you out.
He’s a great performer and a true support for any player who’s a fan of rock
music. Trigger the Rainbow Reels bonus game or the Free Spin mode and you’ll
never wish for anything else. Yggdrasil’s amazing graphics and sounds will feel
like a rainbow after the rain.