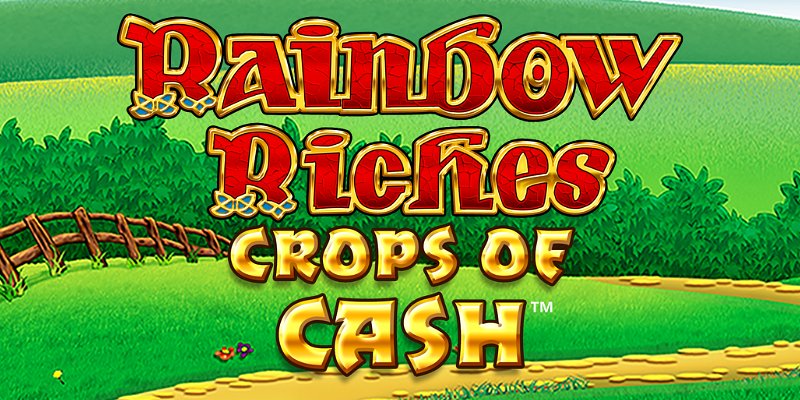 Rainbow Riches Crops of Cash is a new casino slot from Light & Wonder featuring the same Leprechaun we know from Rainbow Riches Piles of Cash, Rainbow Riches Rainbow Frenzy, and several other titles. This time, the grid has been updated to a 5x4 setup where all ways pay, giving you 1024 ways to make a win. We're still in the Irish countryside, looking for the treasures at the end of the rainbow. The bonus feature is a respins game where the Leprechaun can raise the wins significantly by opening up extra rows and increasing each money symbol by up to 10X the bet.

The jolly Leprechaun shows up with something extra in all games. Here, you should look out for the features Wild Symbol, Coin Symbol, Leprechaun, and Crops of Cash Respins.

There's nothing new over the setting of Rainbow Riches Crops of Cash. We're once again in the Irish countryside with green hills and mountains in the background. Light & Wonder hasn't put a dime into the graphics budget, and we've got to say that the game has a pretty outdated look. As usual, the music consists of violins and other instruments associated with Irland, although it doesn't have the same traditional sound as in other Rainbow Riches titles. The white reels have a golden frame, and a little sign to the right reminds the player about the game's 1024 ways to win. To make a win, you need to land at least 3 of the same symbols on adjacent reels, starting with the first reel to the left. The game is available on desktops, notepads, and mobile phones.

The lower-paying symbols are the familiar 10, J, Q, K, and A. Landing a win of 5 symbols awards between 1X and 1.5X the bet. The higher-paying symbols are a leprechaun's hat, a horseshoe, a harp, a mushroom, and the game's logo. These symbols pay between 2X and 20X the bet for a 5-of-a-kind win. The Wild Symbol substitutes all symbols except the Coin Symbol, which triggers the Crops of Cash Respins feature. There's also a Leprechaun Symbol, which only appears in the respins.

Players who have met the Leprechaun know he's a nice guy trying to help you find the treasure. In this game, you'll find the features Wild Symbol, Coin Symbol, Leprechaun, and Crops of Cash Respins.

What is the max win in the slot Rainbow Riches Crops of Cash?

What features are available in the slot Rainbow Riches Crops of Cash?

The features are Wild Symbol, Coin Symbol, Leprechaun, and Crops of Cash Respins.

The Wild Symbol is a golden coin with the text "wild." It appears anywhere except on the first reel to the left. The Wild substitutes all symbols except the Coin.

The Crops of Cash Respins start whenever the player lands 6 or more coins. The coins are locked into position while all other symbols are removed. The player will get 3 spins with the possibility of landing blanks, coins, or leprechauns in each position. Landing a coin or Leprechaun will reset the spins to 3. All coins that land will be locked into position, and the leprechauns will be removed for the next spin.

The bronze, silver, and gold coins have values of 0.5X, 2X, and 5X from the start. Each time a total of two leprechauns land, the coin values will level up. At the same time, an extra row will be added on top of the reels. It's possible to level up 3 times, resulting in a total of 7 rows in the feature.

The coin values for each level are:

The feature ends when the player runs out of spins or when the entire grid is filled with symbols. When the feature is over, the values of all coins are added together and paid out.

There's no doubt that leprechauns are popular in the slot world, and Light & Wonder keeps on releasing titles with the little red haired fellow in green clothes. We have met him in the scratch card game Rainbow Riches Piles of Cash, and in the casino slot Rainbow Riches Power Pitch, where he serves up a respins feature with up to 11 reels. The very basic graphics are just the same in this game, speaking to players who prefer a retro look.

Something new in Rainbow Riches Crops of Cash is the 1024 all ways win setup. The respins are also somewhat unique with extra rows being added every time 2 leprechauns are collected. Despite that, it's hard to become overly excited about this game unless you're a true fan of the genre. The RTP of 96.00% is alright, just below industry standard, and we can't complain about the max win of 11520X the bet.

Rainbow Riches Crops of Cash from Light & Wonder is another game in the popular leprechaun series where the green little fellow upgrade symbols and add extra rows in the bonus feature.