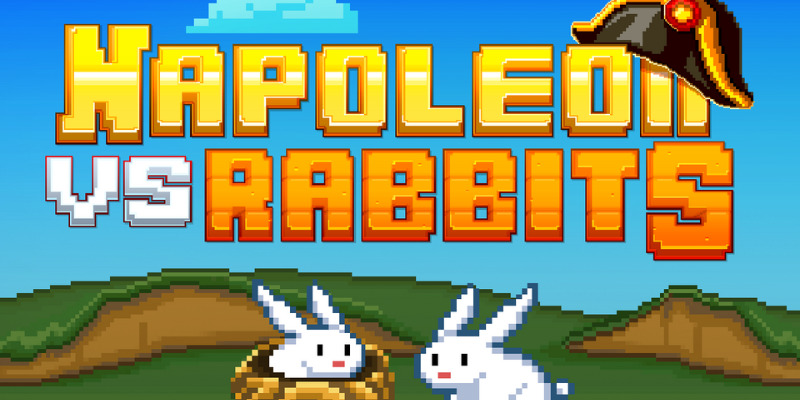 Napoleon vs Rabbits is a new casino slot from Blue Guru Games in which, as the game's name suggests, we are treated to a gaming experience with these two parties. At first glance it sounded like a rather funny made-up story, but which after a little quick research revealed that in addition to the Battle of Waterloo, Napoleon also lost a battle against fluffy rabbits.

After a long streak of successful wins against various big countries, Napoleon wanted to celebrate this by hunting rabbits. He ordered his chief of staff, Alexander Berthier, to catch as many rabbits as possible and then release them at the hunting event. Alexander had the brilliant idea that instead of catching wild rabbits, he could buy domesticated rabbits, which he did. When the day came, thousands of rabbits were released, but instead of fleeing, these rabbits turned and started running towards Napoleon, with the expectation to get food from him. Napoleon and his crew had to flee the place very quickly to avoid being attacked by these rabbits. We now get to experience this slightly comical event again, where a festive 8-bit design has been applied, similar to what we have seen before in the Banana Town game, among others. Let's visit this place and find out what you can expect to see during the spins.

Napoleon vs Rabbits is a video slot from Blue Guru Games that features 7 reels and 7 rows. It is cluster pays mechanic that applies, where 5 or more of the same symbol type in a cluster creates a win. You can choose between making a Min.bet of 0.10 and a Max.bet of 100. The game has been created with 3 different RTPs, with an RTP of 95.45% by default, but game operators can also choose to use one of the lower RTPs of either 94% or 90%. Napoleon vs Rabbits has a hit frequency of 40% and a high volatility, where you can win up to 3894X the bet. When activating the bonus game, the average win is 39.71X the bet.

Within this comical battle between Napoleon and a gigantic number of rabbits, we have a couple of great features to help us in our quest for the bigger wins. The features are Wild Symbol, Rabbit Run, Mystery Rabbit, Mystery Rabbit Box, Free Games and Bonus Buy.

The game is based on the theme of the battle that Napoleon lost against a bunch of rabbits. The game has been created with a nostalgic 8-bit design where you can see a green open field surrounded by a lush forest. You can play this slot on all the devices notepads, desktops and mobiles. You create a winning combination by landing 5 or more of the same symbol type in a cluster that has adjacent or vertically positions. When a win is created, the cascade feature is activated whereby the winning symbols are removed from the reels and then new symbols fall down to cover the empty positions. This continues as long as new wins are created.

What is the max win in the slot Napoleon vs Rabbits?

What features are available in the slot Napoleon vs Rabbits?

The game's wild symbol helps create more winning combinations by substituting for other symbols, except for the mystery and mystery box symbols.

If you create a winning cluster that includes a Napoleon wild, a rabbit will be spawned on the side of the reels. When no more cascade is created, the spawned rabbits will run towards the Napoleon wild and convert normal symbols to mystery symbols during the way there. If the rabbit runs over the mystery boxes, these will be unlocked.

The symbols that have turned into mystery rabbit symbols will turn into the same random symbol type.

If you manage to unlock the mystery rabbit boxes, they will release extra mystery rabbit symbols on the reels. They are also unlocked if a win is created on an adjacent cluster.

If you want to take advantage of the free games feature right away, you can use the bonus buy option. You pay 50X the bet and then the bonus game is activated where the RTP remains 95.45%.

With each passing year, the graphics in the world of slots are getting sharper and sharper and with games like Serial, we can truly say that classic fruit slot machines have taken part in a huge evolution. However, at times it is nice to take part in a nostalgic, retro design where the 8-bit often is very appreciated. We've taken part of several bangers over the years that have utilized this design style, where we have Street Fighter II: The World Warrior, among others. This time, however, we get to take part in a much less bloody battle that unfolds between Napoleon and a bunch of rabbits. A comical battle that hasn't received as much attention as the much more significant battle of Waterloo.

The game has a charming design and the game's features are very easy to grasp. The cascade features many times results in a spin being long and during these you can collect huge amounts of rabbits on the side of the reels. These will then generate mystery symbols and also unlock any mystery boxes that they pass. When you unlock 3 or more mystery boxes at the same time, you activate the bonus game. The bonus game has similar features as the base game, but here you can also take advantage of a win multiplier that will gradually increase during the spins.

The game has an RTP that is slightly lower than the average, where we would have liked it to be slightly higher and the same goes for the potential max win, which is 3894X, where in their Curse of the Mummies we could see a much higher size of the max win. All in all, it's a game that has a very entertaining set of features that interact well with the unique theme that has been chosen.

Napoleon vs Rabbits is a slot where charming 8-bit graphics elegantly converge with a festive theme and great features.