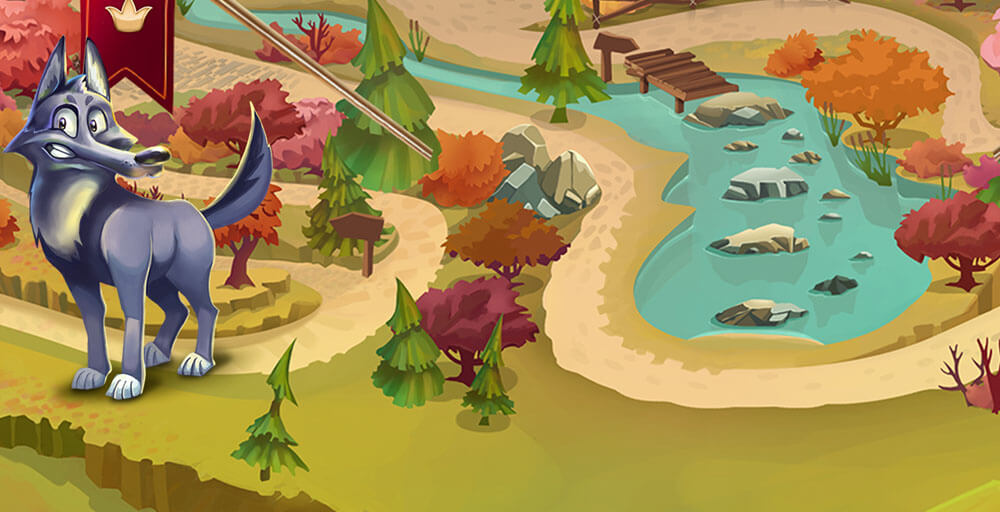 Follow the Little Red Riding Hood through the woods, and keep an eye in case the big bad wolf shows up, trailing after her in this entertaining Red Rake video slot. The wolf seems pretty cute in the cunning sort of way. On 5 reels, and 25 pay lines, he's gonna perform a few stunts in order to trick everybody else, and have his way. Thankfully, there is someone to stop his ridiculous schemes. So, if you want to find out what happened to him, and to the main character in this story, stick around, as the ending differs a bit from the fairy tale on which is based.

Walking slowly, picking flowers, Little Red Riding Hood isn't aware a wolf is spying on her from bushes. He's hungry and sees her as his dinner. When they get to talking, he finds out about the grandma. So, this greedy little wolf becomes ambitious and starts thinking about the double main course.

The wolf hurries off in order to start with grandma and saviour Little Red Riding Hood. When he's gone, our main character enjoys the nature, especially the flowers, and then heads to her final destination.

Along the way, besides the wolf, grandma, and the girl, a woodsman will appear, saving the day at the last minute. Also, a basket full of goods will land from time to time, and a few letters.

Among special cards, there is a Wild in the shape of a house, and 2 Scatters, Little Red Riding Hood, walking through the woods, and the wolf, pretending to be grandma.

While the wolf plays his tricks, a catchy tune is on, fooling him into believing he'll have a double course meal.

Grandma and Her Massive Nose

This fairy-tale themed video slot brings a lot of interesting ways to gather a basket of coins. One of them is the Normal Wild with his replacement power, except in the Scatters case. The other opportunity is given with the Little Red Riding Hood Scatter, landing 3 times on the reels 2, 3, and 4 at once. The initial number of free spins is 10, but you'll have a chance to add more.

The way to add more spins to this number is with the Free Spins Phase. Here jumps the Wolf Scatter. Every time he appears, the cell will become blank, and the place below with the Wolf Scatter meter will be filled. With every completed phase, a reward in form of additional Wilds and free spins will be given. The first transforms grandma to the Wild, and the next one Little Red Riding Hood plus 2 free spins, and the last, the woodsman, and his 2 spins.

A Basket Full of Goods

In the regular game, and with free spins feature, a special Wild turns up. It's the basket, filled with food, and besides all treats inside, it also brings special multipliers. Depending on the number of these Wilds, a multiplier is chosen. One basket brings a x2 multiplier, while 2, and 3 deliver x3 and x4.

The End of the Tale

The wolf was lucky enough to survive when the woodsman caught him and freed grandma and the Little Red Riding Hood. He ran to the woods, hungry as he was before. But, considering all, he's pretty funny, particularly with the impersonation. So, don't judge him to severely, because he's part in the free spins phase may be quite lucrative. Despite his attempts to eat people, the game gives an easy-going vibe, and if you think that's a good thing, give it a spin.