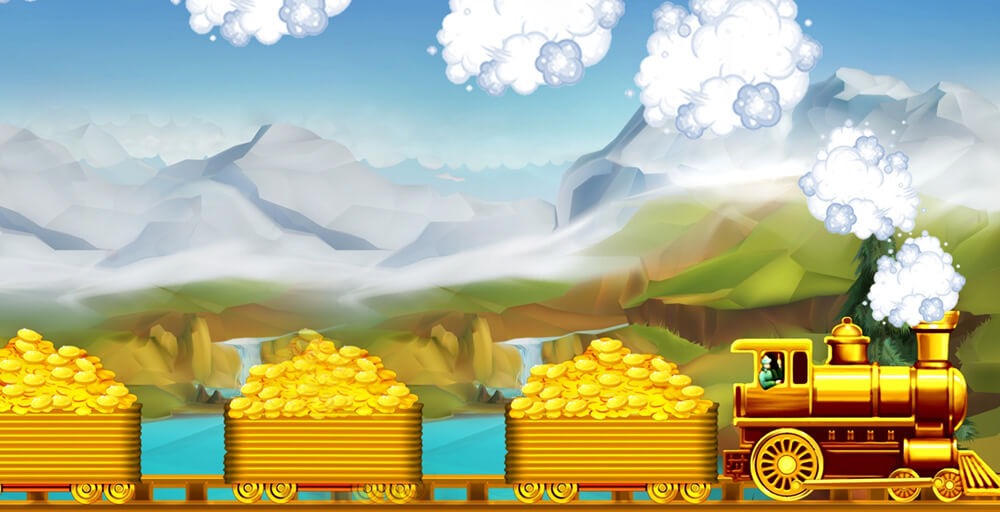 This
journey begins on rails, and it'll be one of a kind. With 3 reels and 3 paylines,
powered by
, the fun can begin with the Gold Train slot. So, get
on this train, and prepare yourself to collect some coins. Don't forget to buy
the ticket because a conductor will be
there to check, and with a gold card maybe you'll get an upgrade. When the
whistle blows, the train will be set in motion, and your travels will
officially start. Furthermore, you should find your seat and hope you'll end up in one of the good carriages.

The Gold
Train slot takes you to a great world of the railway, and it's a world definitely worthy of visiting. It's very
comfortable, luxurious, and quite relaxing. When you hear the sound of a locomotive, the train we'll be ready for a
departure. Get settled because the ride
will last, and if you look through the window, you'll see it's already dark
outside.

The Gold
Train slot is simple, very old-school, and pretty amazing at the same time. It
has a few excellent animations, especially when the Progressive Bonus feature
gets triggered. Almost all the sounds in
the game match the railway system sounds, and it feels quite authentic. There
are various colors present, with red, and grey dominating.

The steam
locomotive as a Wild looks really nice
and the scatter ticket doesn't appear bad at all, quite the opposite. There
also a few other symbols, such as the railway bars, the conductor's hat, a bell, and flags.

Plenty of Gold in the Carriage

The Journey
on the train delivers lucrative features with creative layers and a lot of coins to
be collected. The locomotive Wild will substitute any other symbol but the Scatter and Upgrade, and it will add to your
balance remarkably.

The
opportunity to earn more will present itself with 3 Scatter tickets and the
Progressive Bonus feature they unlock. The Bonus feature brings a random number of carriages, full of coins,
starting with 10.

While the
regular game is in progress, the gold Upgrade will land occasionally on the third reel, and it'll reward randomly between 4
and 10 carriages for the next Bonus round.

During the
Bonus feature, some carriages may be transferring
the Upgrade, and if that's the case, starting with 4 and up 10 carriages will
be assigned to the feature in play.

Hop on the Train & Start the Game

The
simplicity of the Gold Train
feels amazing, specifically when it
comes to well-thought features and the authentic sounds. It makes you believe
as if you were travelling somewhere, and the train was the only good enough
transportation. With steamy locomotive, rails on the reels, and conductor hat,
it gets even better. You should just purchase
the ticket, and the train is ready to go. All we need is for the train
controller to give the sign, and the adventure
may begin.

If you like
trains, this one is right for you. It full of gold, possibilities, and trains -
so how could you possibly say no to that even if your name isn’t Sheldon
Cooper?