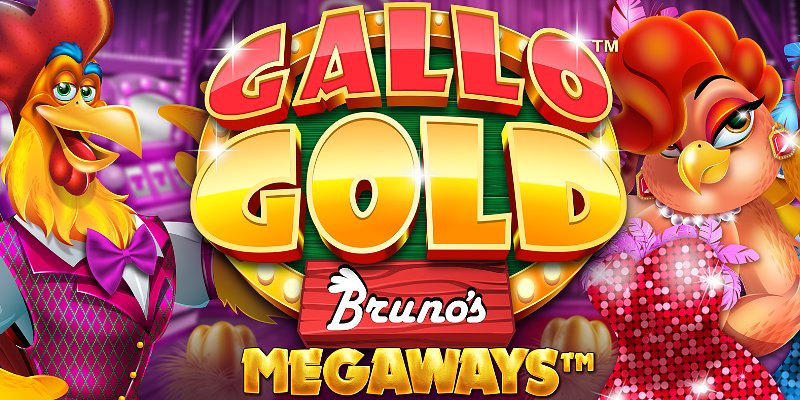 Gallo Gold Bruno's Megaways is a new casino slot from Neon Valley Studios with the cocky rooster Bruno as the main character. Gallo means rooster in Spanish, and the word can also describe a tough guy or someone with an attitude. Gallo is also the biggest Guatemalan beer, and the brew's logo can be seen on t-shirts and other merchandise in the country. Gallo Gold Bruno's Megaways has free spins with an unlimited win multiplier and a Jackpot Pick Game, awarding up to 5000X the bet. Let's look at what else the big guy in the hen house offers.

Bruno has turned the hen house into a grand casino. We're inside a house with thin barn-looking walls. Lines of led lights run from the floor to the ceiling, and several one-armed bandits stand next to the walls. The grid is on the right-hand side of the screen, and to the left is Bruno, next to a big wooden barrel of gold coins. Above him is a display of the four Jackpots.

There are 6 regular reels and an extra horizontal above reels 2, 3, 4, and 5. The horizontal tracker spins from right to left, and the symbols appearing there belong to the same reel beneath them. Each reel changes the number of symbols between 2 and 7 on every spin, giving the player 117649 ways to win when all reels have the maximum number of symbols. To make a win, you need to land at least 3 of the same symbols on adjacent reels, starting with the first reel to the left. The game is available on mobile phones and other devices.

The lower-paying symbols in Bruno's world are 9, 10, J, Q, K, and A. They will give you 0.8X to 1.8X the bet for a 6-of-a-kind win. The medium-paying symbols are 3 hens with green, blue, and red frames. It's hard to separate the hens by looks, though, so it could actually be the same one in different poses. The hen symbols award between 2X and 7.5X the bet for a complete winline. Big old Bruno is by far the best-paying symbol, giving you 50X the bet for a 6-of-a-kind win. It's also the only symbol awarding a win for just 2 symbols. The Wild Symbol substitutes all symbols except the Scatter.

What is the max win in the slot Gallo Gold Bruno's Megaways?

What features are available in the slot Gallo Gold Bruno's Megaways?

All winning symbols are removed from the reels when a win is made. That makes the reels start rolling, producing new symbols that fill up the empty positions. If you're able to make a new win, the symbols will disappear again while new ones roll in. The consecutive wins continue as long as you make new winning combinations, and they all belong to the same spin.

The Wild Symbol is a gold coin with a rooster. It substitutes all symbols except the Scatter, and only appears on the extra reel above reels 2, 3, 4, and 5.

The Jackpot Pick Game can trigger every time a Wild Symbol lands. The symbol is collected in Bruno's gold coin barrel as soon as a spin is over, and the more Wilds that land, the bigger the chance of triggering the feature.

The Pick Game has 12 playing cards face down, and the player gets to pick one at a time until the same symbol has been chosen three times. Each symbol represents the Mini, Minor, Major, or Mega Jackpot, worth 15X, 50X, 100X, and 5000X the bet. The feature is over when one of the Jackpots has been paid to the player.

The Free Spins start with at least 12 spins, plus 5 more for every extra Scatter that triggered the feature. A win multiplier starting at 1X is added to the game. Every time you make a win, the multiplier is raised by 1, and there's no upper limit for how much it can grow. The free spins are over when the player runs out of spins.

Gallo Gold Bruno's Megaways has the exact same features as Wolf Blaze Megaways, and almost the same payouts too. The game stats are so similar that it's surprising that different game developers have made the games. Both Neon Valley Studios and Fortune Factory Studios work with Games Global, so there might have been some collaborations in creating the games.

Whether you prefer Gallo Gold Bruno's Megaways or Wolf Blaze Megaways comes down to if you're into cartoon-looking quirky games like Bruno's or more real-life nature games with wolves and other wild animals. The graphics of Gallo Gold Bruno's Megaways look good and are more vibrant than the wolf game. Both games have the same kind of bonus games with an unlimited multiplier in the free spins and a Jackpot game awarding up to 5000X the bet.

The somewhat random max win of 18164X the bet is definitely on the better side in this highly volatile game. The RTP of 95.98% isn't as awesome, but good enough if the game attracts you. A chicken game with better RTP is Pragmatic Play's Chichen Chase, and a more freaked-out game on the theme is the cluster-win Chicken Drop.