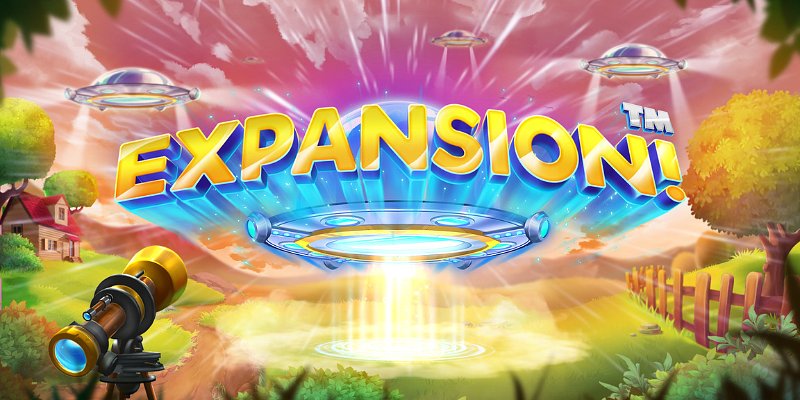 Expansion! is a new casino slot from Betsoft that takes the player on an astronomical adventure. You can watch planets and stars straight from your backyard, and the universe can act in mysterious ways, awarding sweet wins. Get ready for Stacked Mystery Symbols and Directional Wilds, turning other symbols into Wilds by shooting a ray gun. You can also trigger up to 15 free spins with random multipliers of up to 10X the bet.

The universe is expanding and can make all sorts of things happen. When you’re looking at this infinite space, don’t miss the features Wild Symbol, Directional Wilds, Stacked Mystery Symbols, Free Spins, and Bonus Buy.

Most people are probably aware that the universe is infinite, yet expanding. It might be hard to grasp that something infinite keeps on growing, but the universe has been developing since it was created over 13.787 billion years ago, according to the Big Bang theory. Expansion! has a telescope on the left side of the reels, pointed towards the sky. It stands on an open green field in the countryside, and the game’s UFO logo sits in the upper left corner. You make wins by landing 3 or more of the same symbol on a payline going left to right. All wins must start on the first reel to the left, and you can play the game on mobile phones, notepads, and desktops.

The lower-paying symbols are 10, J, Q, K, and A. They award the same, giving you 0.83X the bet for a 5-of-a-kind win. Moving up to the higher-paying symbols, we find 5 celestial bodies. You have 3 brown planets, a purple one, a green circle, a blue planet, and a yellow star. These symbols will give you between 1.33X and 3.33X the bet for a win containing 5 symbols. The Wild Symbol substitutes all other symbols except the Scatter.

What is the max win in the slot Expansion!?

What features are available in the slot Expansion!?

The Wild Symbol substitutes all symbols except the Scatter Symbol. It only appears in the Directional Wild feature when a ray gun lands on the reels.

A ray gun can land anywhere on reels 2, 3, and 4 on any spin. It will randomly shoot a ray in any of its eight directions, transforming all symbols on its path into Wilds. The position where the gun lands also turns into a Wild Symbol.

Each reel contains positions for Stacked Mystery Symbols. The positions are replaced with one random regular paying symbol on each spin. If all reels display their Mystery Symbols when they stop, you can count on scooping up a nice win with many symbols of the same kind on the grid.

Landing 3, 4, or 5 Scatter Symbols anywhere triggers 8, 12, or 15 Free Spins. The Scatters can appear on all reels. During the feature, the ray gun becomes extra powerful and shoots in two directions instead of one. A random multiplier of 2X, 3X, 4X, 5X, 8X, or 10X is also added to each spin. The multiplier is applied to the entire win on each spin. You can retrigger the Free Spins by landing 3 or more Scatters.

Looking up at the expanding universe can result in several cool things in this space adventure. When seeing the game’s UFO logo, one might expect to encounter aliens, but that never happens. You will instead focus on landing celestial bodies like planets and stars. A good chance to score big is the Mystery Symbol feature which lands the same symbol stacked on the reels. If all five reels stop at their Mystery Symbol positions, you can expect to scope up something really valuable.

The Directional Wild feature works great, producing up to 4 Wilds in the base game and 8 in the free spins by shooting a ray gun. Landing 3 or more planet Scatter Symbols will get you the free spins, which also have a multiplier of up to 10X on every spin. Players who like to place their bets on regular numbers might find this game’s system a little annoying since all bets have to be divisible by 30.

Suppose you’re bummed out that no extraterrestrial life appears in Expansion!. In that case, you might want to check out Invaders Megaways, with up to a million ways to win, or Invading Vegas, where the number one gambling town Las Vegas is invaded by little green creatures.

Expansion! from Betsoft takes the player for a ride around the universe where ray guns shoot Wild Symbols, and the free spins have a win multiplier of up to 10X the bet.