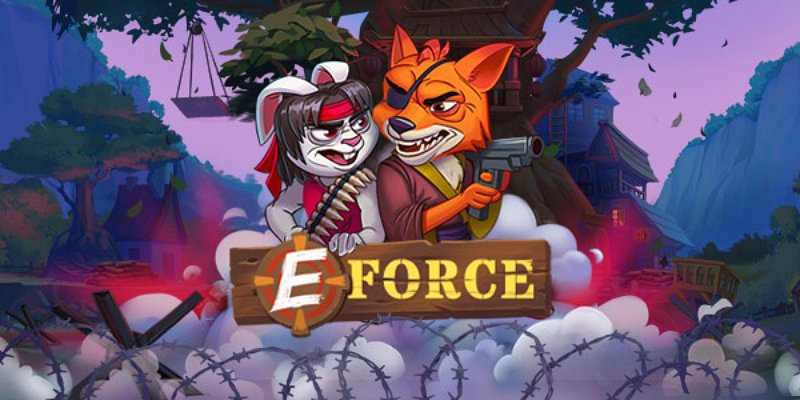 E-Force is a new casino slot from Yggdrasil with a gang of superhero rabbits fighting to defend their village Easterville from the evil fox, Dr. Zeppelin. Four of the village’s most powerful rabbits have been trained in martial arts to finish Dr. Zeppelin for good. To their help is a Robocop-looking Wild rabbit, who can also help you trigger the free spins by substituting the Scatter Symbol. Once in the feature, you’ll have a growing multiplier that multiplies all wins. Let’s go to Easterville straight away.

E-Force is a video slot from Yggdrasil with 5 reels, 3 rows, and 243 ways to win. The Min.bet is 0.1, and the Max.bet is 100. Players of this superhero adventure have an RTP of 96%, and the volatility is mid/high. The perfect game session can bring the max win of 10000X the bet, and the hit frequency of 27.16% means that a little more than every fourth spin is a win.

The E-Force team is stronger than most people can imagine. In the game, you’ll experience the features Wild Symbol, Scatter Symbol, Free Spins, and Bonus Buy.

Easterville is a beautiful little rabbit village in a green valley with mountains on the sides. The rabbits live in houses built in trees and on the ground. The dark reels display action-hero rabbits and easter eggs in different colors, with graphics that might remind the player of old cartoons such as Teenage Mutant Ninja Turtles. To make a win in this colorful world, you need to land the same symbol on 3 adjacent reels, starting on the first reel to the left. This gives you 243 ways to win on each spin, and you can play the game on mobile phones and other devices.

The lower-paying symbols in Easterville are easter eggs in blue, green, yellow, and red. They are wearing a hat, knife, belt, and machine gun bullets. The eggs all pay the same, giving you 2X the bet for a 5-of-a-kind win. The higher-paying symbols are four rabbits in the same colors as the eggs. One is holding a whip, another a bazooka, and the yellow one is equipped with nunchucks, just like Michelangelo in Teenage Mutant Ninja Turtles. The red rabbit has a machine gun and a headband, reminiscent of Charlie Sheen’s character in the movie Hot Shots. The rabbits pay between 4X and 10X the bet for a complete winline, and the Wild Symbol substitutes all symbols, even the Scatter.

What is the max win in the slot E-Force?

What features are available in the slot E-Force?

The Wild Symbol is a rabbit wearing a Robocop-looking outfit, holding a gun in his right hand. It appears on reels 2, 3, and 4, and substitutes all symbols, including the Scatter. In the free spins, every Wild adds an extra spin and increases the win multiplier by 1.

You start the Free Spins with as many symbols as you trigger the feature with. Triggering symbols can be Scatters, Wilds, or a combination of them. The game starts with a win multiplier that increases by 1 for every triggering symbol. The multiplier can also grow during the feature by landing Wilds and Scatters.

The Free Spins are played until the player runs out of spins or until the max win of 10000X is reached.

The free spins are for sale. You can purchase a random number of spins from 3-9 for 50X the bet. You can also pay 500X the bet for 15 free spins.

Easterville is a cool world Yggdrasil has created for us, reminiscent of a cartoon from the 90s. All the rabbit superheroes have their own weapons and looks, making them more personal. We also give an extra thumbs up to the Wild Symbol, wearing a Robocop-looking mask made to fit the rabbit’s ears. Rabbits might be frightened little creatures in the real world, but they become the coolest gang when they join the E-Force.

The Wild Symbol is extra valuable in this game since it doesn’t only substitute all regular symbols but also the Scatter. You can mix Scatters and Wilds to trigger the free spins with a total of 3 symbols. The free spins also have a multiplier that helps create juicy wins. Don’t expect a huge amount of spins, though, since you only get as many spins as the number of triggering symbols. Every Scatter and Wild turning up in the feature gives you an extra spin, so the lucky player might end up spinning a good amount of spins. It might even take you all the way to the max win of 10000X the bet.

If you, for some reason, don’t like fluffy rabbits or want to wait until Easter to play E-Force, you should know that there are a few other games with cartoon-looking animals. Check out the football game Hot Shots 2 or the raccoon and raven in Heroes Hunt Megaways.

E-Force from Yggdrasil is a superhero slot where rabbits use martial arts and other tricks to defend their village of Easterville.