Crypt of the Vampires 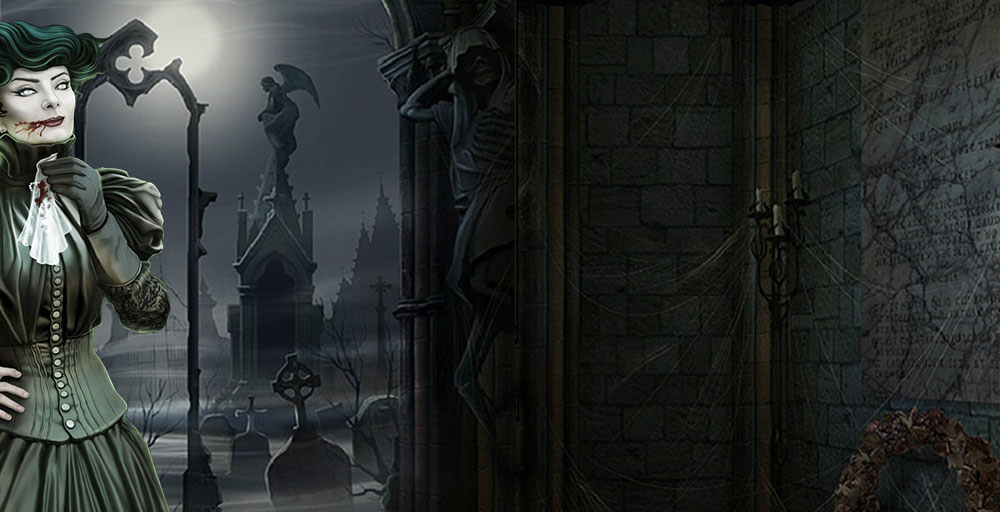 Crypt of the Vampires

The pale ones say hello in the Crypt of the Vampires video slot, powered by Red Rake Gaming. With 4x3x3x3x4 reels setting, they have a perfect opportunity to stretch and scare you even more. There are four of them, and without a doubt, they are a pretty scary blood-sucking gang. Living deep down in the crypt, near the graveyard, they only come up during the night and lure they victims with 432 ways. Be warned, there will be a big trace of blood after them. So, if you are repulsed by the notion, keep your distance. But, if the blood and gore are just fine with you, then enjoy the ride with the creatures of the night.

The Perks of Vampire Life

In the Crypt of the Vampires 4 vampires hang out , Gabriel, Elizabeth, Oliver, and Sophie. The crypt is big enough for all of them as they only stay there during the day. During the night time, they get out and go their separate ways, because they're pretty keen on keeping their feeding habits to themselves. So, they wander around, and each of them finds their own food.

From time to time, in this dark place, the blood will flow, and you'll hear Gabriel and Oliver mumbling with joy. The ladies are a bit more subtle. These blood-loving creatures will also expand on the first reel, meaning they are quite satisfied with the catch of the night.

Maybe a few brave village people will try to stop them with a garlic, wooden stake, or the cross. Unfortunately, all the attempts will remain fruitless, and all those brave villagers will become food.

Occasionally we'll see a bat in the night. That's probably Oliver, doing his patrol duties. While the 4 saunter on the reels, there will be a horrifying sound plus the thunder.

Besides the vampires, the bat and the weapons to kill them, there will be a crypt entrance, a chalice full of blood, a candle, and a Bonus Wheel symbol.

Muster the Courage to Enter the Crypt

This truly frightening, and an amazing game at the same time, provides incredibly creative features. Right away you'll have a chance to see the Vampire Attack with one of them taking over the first reel. When that happens, all the rest of the vampires on the reels will transform into him or her, depending on who takes over.

The other random feature spills blood on the reels 2, 3, 4, or 5. It's called the Bloodthirsty, and after the spill, you'll see Wilds between 1 and 8 on those affected reels. The Wild can act as every icon but the candle, and the Bonus.

With each candle on the reels 2, 3, and 4, one will be lit below, and with all of them, a jackpot will be gathered. The jackpot will serve as the bet inside the free spins feature which gets triggered with all the candles. Then, the task is to pick the coffin, and depending on the vampire in it, a certain number of spins will be awarded.

Gabriel brings 18 free spins, Elizabeth 16, Oliver 14, and if you wake up Sophie 12 free spins are yours. While this feature is in play, all the vampires turn to one from the coffin you've picked. Also, the Bloodthirsty is more frequent.

Bonus Wheel in the Crypt

This slot is full of surprises, and one comes in shape of the Crypt Wheel Bonus. If you want to trigger it, it's necessary to land 3 Bonuses on the reels 1,3, and 5. The Bonus on the second will tell you the number of spins. On the wheel, the prizes are multipliers, coins, additional spins, level increase, and skulls. There are 5 levels, and with each, reward gets bigger. The rest of the spins will be multiplied by the bet if you get the skull. The skull also ends the feature.

In the Crypt of the Vampires, you'll meet 4-night crawlers who are quite generous when it comes to rewards. They may fuss, and drink blood, but they do give a spectacular show. The visual aspect is quite amazing, especially with all the animations. The sound effect simply makes you adore these vamps. So, if you like dark themes, play the game with Gabriel, Elizabeth, Sophie and Oliver.