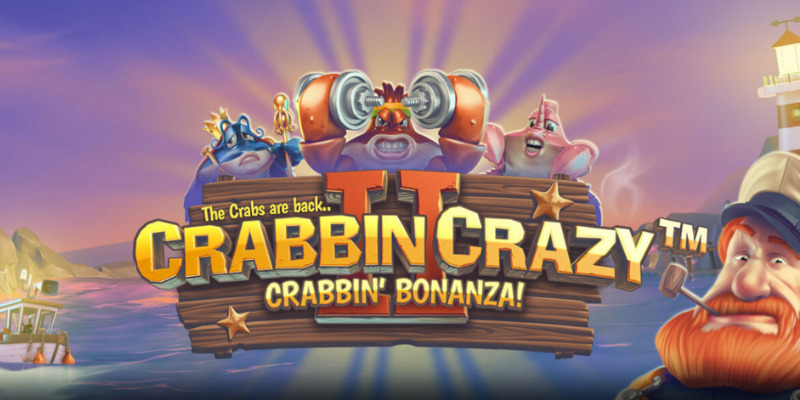 Crabbin' Crazy 2 Crabbin' Bonanza is a new casino slot from iSoftBet where we get to enjoy a fond reunion with the crabs. It was back in early 2022 that we could take part in the first version Crabbin' Crazy, whose colourful environment, as well as the Hold&Win feature, made up for an entertaining stay. This time around, the game comes packed with similar features, where small adjustments have been made. Among other things, we can see that the previous max win, which was 1585X, has been increased to 2000X, something that is still at a lower level compared to what other game developers offer. Let's visit this site and find out what else has changed within this sequel.

Within this fishing adventure among huge crabs, we can scoop up nice winnings with the help of the features. The features are Wild Symbol, Mystery Crate, Crabbin' Bonanza Respins, Fisherman, Taxi Crab, Pick a Bucket and Crabbin' Licence.

The game's design features a crab theme, in which we follow a fisherman in the hunt for these hard shelled creatures. In the background of the reels, we can glimpse a lighthouse and a fishing boat. You can play this slot on all devices notepads, desktops and mobiles. You create a winning combination by landing 3 or more of the same symbol type on adjacent reels starting at the far left.

What is the max win in the slot Crabbin' Crazy 2 Crabbin' Bonanza?

What features are available in the slot Crabbin' Crazy 2 Crabbin' Bonanza?

During your spins, mystery crate symbols can randomly land on the reels, with all of them transforming into the same random symbol type to potentially generate a win.

If you land 5 or more crab symbols simultaneously, the Crabbin' Bonanza Respins feature is activated. You will then be moved to a new location and receive 3 respins. During these respins you can only land crab or blank symbols, whereby you reset the respins to 3 when you land 1 or more crabs. The crab symbols will land with different values that are from a predefined set. If you land a super crab, it will double all values on the reels, including the fisherman symbol. Once the super crab has doubled the value of the symbols, it will turn into either a 10X, 25X or 50X symbol.

This symbol acts like a wild in the normal spins, but within the respins feature, it comes with an extra feature. There it will collect all the values from the crabs when it lands, freeing up extra spaces for new crab symbols to land.

When you spin the reels, and no win has been created, the Taxi Crab feature can be randomly activated. You will then either receive a big win or trigger the respins feature.

The fisherman can randomly appear within the base game, where he triggers the Pick a Bucket feature. You then get to choose between three different buckets, where 1 of 5 different outcomes will be revealed.

Synced Reels = This will sync 2 or more reels, where these then show the same symbol patterns.

Catch of the Day = You will create a win, where it then will create a respin, and the win can then be built on. Each time the win is improved, you will receive a new respin.

Colossal Cash = You will land a 3X3 colossal symbol on the reels. It can display all symbols, except for the crab symbols.

Crazy Crabbin' = You will land the fisherman collector symbol on reel 1, and then it will collect all crab symbols that have landed on the reels. You cannot land the super crab during this feature.

By paying 25% extra of your bet, your chances of successfully activating the respins feature will be increased. If you manage to activate the respins feature when the Crabbin' Licence is activated, you will receive 4 respins instead of the 3 respins that you otherwise would receive.

It is once again a joyful spinning experience that we get to enjoy together with these crabs, where harmonious music and colourful surroundings are a great touch to the game. The game comes with high volatility, and the balance can shift greatly during the spins, whereby a maximum win of 2000X can be pocketed. This is a very small increase from the previous version, where we would have liked them to spice up the potential max win a bit to give the game an extra thrill. Just as Forrest Gump expressed that "Life is like a box of chocolate, you never know what you gonna get" this is another game that comes packed with many mini features. There is once again a Hold&Win feature that is the game's main event, where you can scoop up large amounts of crabs. That stay can be boosted further with the help of super crabs that double the values, as well as the fisherman symbol that collects and frees up more space on the reels.

In the pursuit of this lucrative respins game, you can take advantage of a variety of other things as well. For starters, a Crabbin' Licence can be activated to increase the chances of a respins activation, where it also will award 4 respins instead of 3. Spins that don't generate a win can get a second chance as the taxi crab drives by and either award a big win or activates the bonus game. As a cherry on top, the pick a bucket feature can also be activated. Clicking on one of these buckets will give you one of five different features, ranging from colossal symbols to catch of the day, which will liven up the spins in the hunt for the respins feature. The game has received a few upgrades in the form of new features, adding a new layer to the gaming experience among these crabs. Even though none of these features are groundbreaking, the composition is very nice, and one appreciates that this sequel has been made.

Crabbin' Crazy 2 Crabbin' Bonanza is a slot that comes packed with more entertaining features, where you can scoop up wins of up to 2000X the bet.