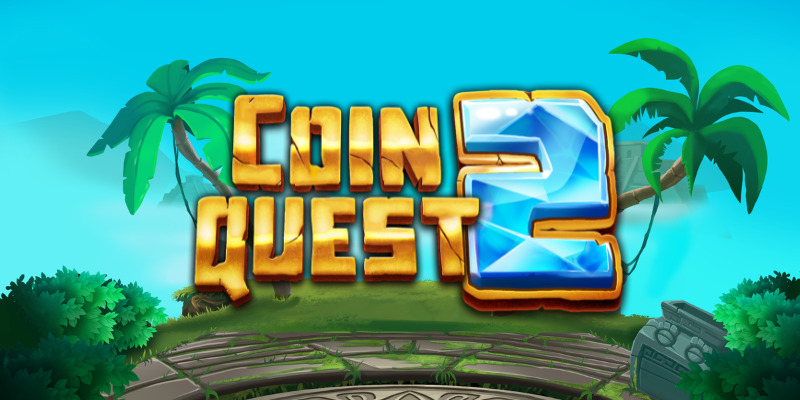 Coin Quest 2 is a new casino slot from Slotmill, updating the successful Aztec game Coin Quest with a bigger grid, several power-up symbols, and a bigger max win at 15000X the bet. You will still find yourself in the jungle of today's Mexico, but the surroundings are more open, with pyramids and totem poles in the background. The higher-paying animal symbols have also been replaced with some scary-looking death skulls. Wins are still made the same way, by landing 5 or more symbols in a cluster, and the Collect Meter has been boosted by giving the player even better wins than before.

Coin Quest 2 is a video slot from Slotmill with 6 reels and 6 rows. There are no paylines; wins are instead made by landing 5 or more symbols in a cluster, connected horizontally or vertically. The Min.bet is 0.2, and the Max.bet is 50. The game's RTP is 96.18%, and the volatility is high as a pyramid. Landing the perfect combination will award the max win of 15000X the bet.

The first version of this game was released earlier this year. There is no doubt that the sequel takes place in the same mystic Aztec vicinity, and the graphics are even sharper and better looking this time. The music also feels like an upgrade from the previous game, where the hand drums and chants have been speeded up. The reels are still placed within a stonewall, but you can see more of the Aztec town with pyramids partly hidden by clouds in the upper left and right corners. To make a win, you need to land at least 5 of the same type of symbol connected either horizontally or vertically in a cluster. The game is available on mobile phones and all other devices.

The lower-paying symbols are blue, green, red, and purple characters. They award between 9X and 15X the bet for a win containing 16 or more symbols. The higher-paying symbols are four scary-looking death skulls in blue, green, red, and purple. Landing 16 or more of them awards between 20X and 75X the bet. The Wild Symbol substitutes all mentioned symbols but not the Scatter or Power Up Symbols.

What is the max win in the slot Coin Quest 2?

What features are available in the slot Coin Quest 2?

As soon as you make a win, the Avalanche will start, and it can go on for quite some time. The winning symbols will disappear while new ones are added. If you're able to make a new win, the winning symbols will vanish again while new ones are added. This goes on as long as you make new wins, and all consecutive wins during an avalanche belong to the same game round.

The Collect Meter is to the right of the reels. It has a burning flame and a diamond-looking symbol at the top. At the bottom is a counter saying 0/25 when you start spinning. When you make a win, each winning symbol gives you a step on the meter. Collecting 25 steps triggers the Collect Meter feature, adding Wilds and Coins to the reels. Advancing and collecting 50 symbols awards more Wilds and Coins than in the first step.

The meter is reset to 0 between spins in the base game, so you usually need a few consecutive wins to trigger it. The meter doesn't reset between free spins.

The Wild Symbol is a W substituting all symbols except the Scatter and Super Scatter. When replacing a Coin, it doesn't have a cash value of its own.

The Coin Symbol has a cash value between 1X and 500X. It can appear anywhere, and you make wins with it by landing 5 or more in a cluster, just like with the regular symbols. The difference is that the coins pay the total value of all winning symbols. Coins disappear in avalanches just like regular symbols. Before the reels are filled up after a win, a coin with the total value of all winning coins is put in a random empty position on the reels.

The Scatter Symbol is a white circle with a blue gemstone in it. The symbol only appears in the base game, and landing 3 Scatters triggers 8 free spins. Landing 2 Scatters together with 1 Super Scatter triggers 8 Super Free Spins.

The Power Up Symbols consist of 4 masks and a blue collect meter charger. All of the symbols, except the Super Mask, transform into Wilds after performing their abilities.

The Meter Charge is a blue gemstone-looking symbol with the numbers 5, 10, or 20. It adds the same number of steps to the Collect Meter before turning into a Wild.

The Wild Mask adds Wilds to the reels before turning itself into a Wild.

The Coin Mask adds Coins to the reels before turning itself into a Wild.

The Transform Mask picks a random symbol and turns all of the same type into another symbol. After the transformation, the mask turns into a Wild.

The Super Mask stays passive on the grid as long as you're making wins. When no more wins are being made, the Super Mask will add random Coins to the grid and then collect them. It also displays a random multiplier which is used to multiply the collected cash value. After the payout, the mask turns into a coin with the total collected value.

A progressive win multiplier is added to the Collect Meter during the Free Spins. It increases by 1 every time the meter hits 25, and Coins and Wilds are added to the reels. The meter never resets between spins in the feature.

The Super Free Spins have all the perks of the Free Spins plus something more. Coins that don't participate in wins aren't removed from the screen. They are instead placed at the bottom or the first empty space towards the bottom when the rest of the symbols are wiped off the reels. The coins at the bottom are available for new winning combinations until the end of the feature. You can't land any Scatters in the Super Free Spins, but the +1 Spin symbol can appear. The feature is over when the player runs out of spins.

Several features are for sale in what Slotmill calls the Fast Track. These are your options:

The guys at Slotmill have managed to make a great game even better. The graphics have been finetuned, and the symbols are sharper in Coin Quest 2 than in its forerunner. The grid has also been expanded with an extra row and reel. The already successful Collect Meter has been updated, not only giving you a bonus when it reaches 25 but an even better one when you reach 50. On top of that, 5 Power Up Symbols have been added, giving you some sweet extras before turning into Wilds or Coins.

Slotmill has also raised the max win by 50% to 15000X the bet and finetuned up the RTP to 96.18%. That's a solid RTP around average among casino slots. It's hard to believe how the developer has managed to create all the improvements. When looking closely, you'll realize that there are some negative changes too, but they are way less than the good ones. One feature that's history is the Coin Quest Bonus Feature, but it's still a part of the Super Free Spins, which works almost the same in both games. The only thing differentiating between the free spins is that the multiplier can increase between 1-20 in the first game, while it only increases by 1 in Coin Quest 2.

The first version also awards the player with a Wild Symbol in a random position on every consecutive win. That sweet little bonus, which increased the chances of making a long avalanche, didn't make it to the remake. Overall, Coin Quest 2 is a fantastic game that should please all players of the previous game. The Gamble Feature in the Bonus Buy is another exciting addition for players willing to take a risk.

Coin Quest 2 from Slotmill takes us back to the Aztec civilization, where you will experience several new cool features while making cluster wins.