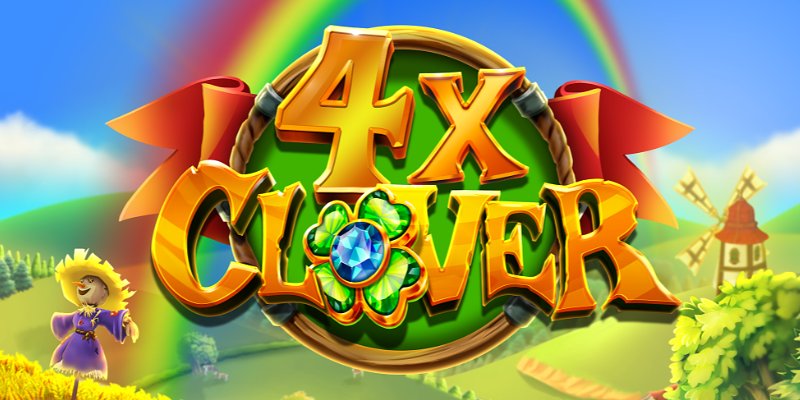 4x Clover is a new casino slot from Live 5 with an Irish leprechaun theme. No leprechauns are present, but the typical symbols such as pipes, green hats, and harps turn up on the reels. You will also find a violin tune with a folk music sound. The by far best-paying symbol is the origin of the game's name: the wild 4-leaf clover. It multiplies all wins it takes part in, and several wilds in a win are multiplied by each other. Landing 5 wilds on a payline will award a breathtaking 10000X the bet. This basic-looking slot with 5 paylines has a free spins feature where only the best-paying symbols can land, giving the player a great chance to find the leprechaun's treasure at the end of the rainbow.

4x Clover is a video slot from Live 5 with a classic setup of 5 reels, 3 rows, and only 5 paylines. The Min.bet is 0.1, and the Max.bet is 10. Unfortunately, the RTP in this Irish treasure hunt is only 94.09%, and the game's volatility is high. Landing the max win will bring the player 10192X the bet. With a hit frequency of 12.47%, players should expect to win once about every eight spin.

This game might seem simple at first sight, but you'll realize that sweet things are awaiting. Look out for the features Wild Symbol, Scatter Symbol, and Free Spins.

The four-leaf clover is one of the most common symbols in the casino world, and it's supposed to bring luck, according to traditional sayings. It's not clear when and how that idea started, but the plant many times turns up in Irish stories. Another common Irish phenomenon is the folklore creature leprechaun, which is said to hide a treasure at the end of the rainbow. 4x Clover is set on green hills with a rainbow in the background. The white reels have golden frames, and a scarecrow stands to the left. To make a win, you need to land at least 3 of the same symbols on one of the 5 paylines going left to right. All wins must start on the first reel to the left, and you can play the game on all devices, such as mobile phones, notepads, and desktops.

The lower-paying symbols are a stone shield, a pipe, a high green hat, and a harp. They pay between 4X and 8X the bet for a combination of 5 symbols. The higher-paying symbols are blue, red, and green 7s, and a green pot full of gold. They pay between 10X and 25X for a 5-of-a-kind win. You can also make wins by mixing the 7s in any way. In that case, they pay up to 2X the bet. The Wild Symbol substitutes all symbols except the Scatter and multiplies all wins it takes part in by 4. It also pays ridiculously well on its own, awarding 10000X the bet for a 5-of-a-kind win.

What is the max win in the slot 4x Clover?

What features are available in the slot 4x Clover?

The features are Wild Symbol, Scatter Symbol, and Free Spins.

The Wild Symbol is a four-leaf clover with the text "4x." It substitutes all regular paying symbols and multiplies all wins it's involved in by 4. The Wild also multiplies itself if several symbols are involved in a win. Landing a winline of only Wilds pays 16X, 64X, 256X, and 10000X the bet for 2, 3, 4, and 5 symbols wins.

The Free Spins work differently than we're used to. You can only land the top-paying gold pot, Wilds, Scatter Symbols, or blanks during the feature. This opens for big wins every time you make a successful combination. When the feature starts, you'll be aware that the folk music tune adds some euro-disco drums and picks up in pace. You can trigger extra free spins by landing 2-5 Scatters, and the feature ends when the player runs out of spins or when the max win of 10192X the bet is reached.

Live 5 has with 4x Clover created a very basic game that is still engaging and exciting, despite its few features and a setup of only 5 paylines. It's a typical leprechaun game without any leprechaun, which doesn't really matter because we have already seen that little fellow in so many games by now. The Wild 4x-clover helps keep the base game interesting since it multiplies all wins it takes part in by 4. The Wild is also multiplied by other Wilds if more than one takes part in a win. In fact, you can score the insanely high 10000X the bet by just landing 5 Wilds on a payline.

In the free spins, there are only 3 available symbols plus blanks. We managed to hit several huge wins while playing the demo of this highly volatile game. One thing that lowers the total rating quite a bit is the RTP of 94.09%, a couple of percentage points below the industry standard. It may not sound a lot, but it will, in the long run, take way more of your pot than other games with higher RTP. Leprechaun Song, Rainbow Power Potz Ultra Nudge, and Stacks o' Gold are just a few of all the other Irish games.

4x Clover from Live 5 is an Irish-themed game where the wild symbol pays 10000X the bet for a win containing 5 symbols.